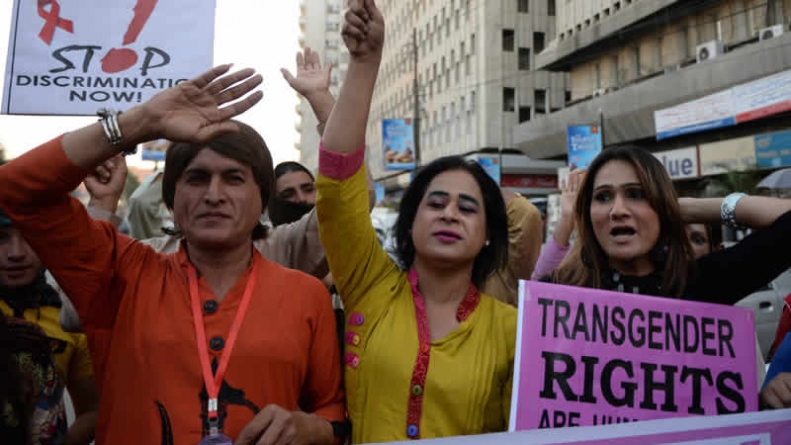 In Pakistan, transgender people include hijras, khowajasara, Murat, kushras and many more. In fact, there are many who do not belong to any of the groups but are transgender persons individually. Transgender fall under the LGBT group (lesbian, gay, bisexual and transgender).

They constitute the marginalized section of the society in Pakistan, and thus face legal, social as well as economic difficulties.

According to the Universal Declaration of Human Rights (2007), Article 2 which says “Every single human being is entitled to enjoy his or her human rights without distinction as to race, color, sex, language, religion, political or other opinion, national or social origin, property, birth or other status”. But in our country we do not even think about the person who has third sex and for this reason we treat them in a curl way. We do not give them their proper rights for instance till 2013 they were not permitted to have the national Identity card. As a consequence of this, they were not ready to appreciate any of the privileges of a national and in addition there is no factual records of transgender populace show in Pakistan, as they were not enlisted in NADRA. Here the privilege of nationality was not conveyed to them. Besides, they are not gave the privilege of government managed savings.

Read More: The Dignity Of Our Nation

For instance as they do not get any respectful way of earning due to their sexual introduction and absence of education, they pick prostitution as their profession, hey offer sex to produce wage. From the more extensive point of view, prostitution itself has so many harmful and dangerous results in society like transmission of STIs and STDs in population. For the determination of third gender issues, it is essential to take a shot at the arrangement of necessary human rights to bisexuals as presentation of bills on government and national levels in Pakistan. Recommended to start a campaign to change the absurd attitude and behavior of people towards bisexuals with the assistance of media and on-going mindfulness sessions and so on. In all the private and open areas there ought to be a reservation of some % of seats for occupations and training for bisexuals. Besides all the partners including religious and group pioneers can play out their part by correcting the misconceptions and misinterpretations people hold related to bisexuals.