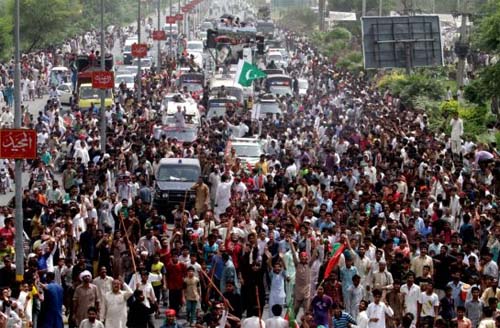 The effective Command and Control has been given to the armed forces to secure and protect the Red Zone. Especially the diplomatic enclave. The interior minister offered no solution or extended olive branch to the protesters. He rather used deterrence factor to intimidate the marchers.

The situation has been escalated due to government’s negligence and delaying tactics. The weakness of the government has been exhibited by the Maulana Tahir Ashrafi and Rana Sana Ullah . Nothing is left in the archery and armory of the government to avoid the sudden death. There will be no clash with the military. The army is neutral in this conflict. The protesters are going to remain peaeful. They have been charged and energized by their leaders last minute speeches warming them.

The moral credibility of the ruling elite will be challenged Ashrafi’s arguments are absurd , untenable and has no relevance to the crisis. The comparison with the North Waziristan situation is quite misleading. The government has called the military in aid of civil administration.

Negotiations are off the table. The legitimacy of the government has completely eroded and become irrelevant in the face of troubling times. The whole election has become disputed due to massive rigging . Army is an autonomous institution and is not the political wing of the government. It has come to aid the administration. History of Pakistan is replete with such examples. The role of the military must be objectively interpreted in the given circumstances.

Addressing the Crowd before the invasion of Red Zine , Imran Khan made a passionate speech and took promises from hos workers to remain peaceful , steadfast. Thank God my nation has woken up. The looters have been taking turns to plunder the wealth of the country. They have become rich at the expense of the entire nation. He narrated his struggle and success in the Cricket Field. Frnally ending his career as the champion in the world cup. The nation is united to form the “New Pakistan”.

He warned Nawaz Sharif not to use brute force against his peaceful workers. Otherwise he would follow him to the last corner of the world. The rhetoric was condemned by the PML (N) leaders and sympathizers. He specifically ststed that he does not want anarchy or violence. After the fierce speeches both the Revolutionary Commander and the Freedom Commander gave the signal for the invasion of Red Zone. The invasion was successfully made possible. We salute the marchers.