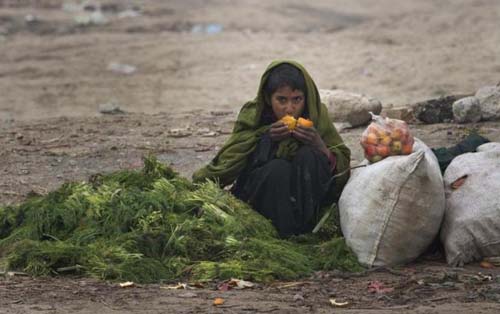 One third of the food produced in the world is wasted, the UN estimates. Stranger it may sound but it’s an incongruous reality. The worth of the global wasted food is estimated to be a staggering $750 bn. This perilous problem is extant in both the developed and the developing world. In United Kingdom, research has shown that households throw away seven million tonnes of food every year while more than half of it is perfectly good to eat.

In sharp contrast to United Kingdom, India loses forty percent of its food due to spoiling. India lacks the sufficient infrastructure to store and transport food products; concomitantly substantial amount of food simply decays away. The UN Committee on World Food Security in its latest report concluded that food wastes and food losses are due to many different reasons in various parts of the world. In wealthy countries food takes up only a relatively trivial proportion of income so people can afford to throw away food but in developing countries like Pakistan the problem is not of wealth but of poverty.

Much of the country’s population resides in the hot plateaus of Punjab and Sindh. In the soaring temperatures of these plateaus, vegetables and fruits do not stay fresh for long. Paucity of cold storage facilities and refrigerated cargo vehicles has repercussions like rotting of food and its being left out. Lack of investment in better farming techniques, storage facilities and transport is the eminent reason. It results in low profits for farmers leaving them at sea and the sky high prices for poor consumers. A country like Pakistan which has low carrying capacity due to limited resources and a rapidly growing population needs to have a highly efficient food transport and storage systems in order to overcomeits hunger problems. Chronic hunger is a widespread problem in Pakistan and with more than half the population of the country earning livelihood from agriculture, it naturally implies that Pakistan should have modern means to transport and store food.

This can be achieved by importing or preferably, if possible, manufacturing refrigerator trucks which have the capacity to keep the fruits, vegetables and other food products fresh while transporting them to markets far away from the farms which produce these food products.Similarly, cargo trains can also greatly improve the situation. The Transportation and Logistics industry needs a revival and on top of that supplementary attention so that it can grow and become competitive enough to truncate the food losses and wastage consequently reducing food insecurity.  Apart from improvement of logistics and transport there is a need to build modern warehouses and temperature controlled storage facilities. Government needs to invest heavily in this sector or make it feasible for foreign investment to occur in this sector. This will greatly reduce the wastage and hence reduce inflation concomitantly lowering the food prices and increased availability of food for the county’s poor.

Government’s plans to build mega-projects, in which the Lahore-Karachi motorway enjoys eminence, will contribute in making everyday life easier and improve the infrastructure, but there are some other issues which cannot be ignored and require attention. Especially the issues of providing the poverty-stricken with the basic needs i.e. food, clothing and shelter, need substantial attention. The exorbitantly rich elite will definitely greatly benefit from the motorway but if it is used for refrigerated transport of fruits and vegetables, the starving may benefit too. Similarly the food wastage needs to be considered in other development projects and some projects should be solely dedicated for the control of food wastage so that chronic hunger can be alleviated from the country by making the food available to poor consumers.