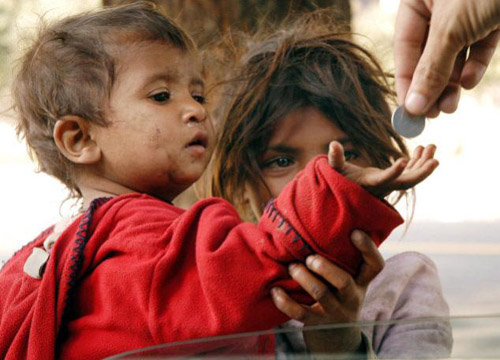 In Lahore the menace of forced child begging is constantly increasing because of widespread networks of criminal mafias which have been expanded under poor legal system including government’s weakness and corruption. Forced begging is one of the most awful ways of human abuse and of course child abuse as well when children are involved in this practice.

Anyone who lives in Lahore or visits this city can tell you that beggars, a significant number of children, are in all places. They tread mosques, shrines, hospitals, streets, markets, traffic signals and public roads reluctantly and helplessly. A large number of children are also seen on the same places carrying handkerchiefs, newspapers and other smaller stuff and use it to mask their begging practices, which fall into the category of child labor. Yes, the future of Pakistan is on the streets. Many of these children can’t even think about education and make successful careers. They are more focused on earning money which they don’t get a hold of by the end of the day. Instead of becoming a doctor, lawyer, teacher or businessman, the children have been thrown in the streets to excel in professional begging.

The beggar mafia exploits the poor children by making them victims of forced begging and living on their earnings. Poor children are abducted, tortured, abused and handicapped in order to be used as a money-making machine by the ruthless creatures. Inayat, a 12-year old, begging near the traffic signal of Zahoor Elahi Road (Lahore) says, “I don’t have food at home that is why I have to come here to beg. My Sahib (guardian) is addicted to drugs and he wants money from me.” I still remember the pain in the eyes of this boy when I was talking to him. I wanted to get off my car and help him right away. I wanted to know who the hell this person he called “Sahib” was. But then the traffic light turned green. I looked behind through the mirror. There were ten more like him.

This scenario raised many questions in my mind. Why these innocents are suffering with these tragic lives? Why no one is taking any action against the real culprits? What is the future of these forced child beggars? Who is responsible for the protection of human rights in our country? Sarah Asad, a consultant on children’s rights also a former executive director of Pehchaan (NGO

working for child protection), said “Repatriation of children cannot be a courier service. A child is not a parcel you deliver to his house and think the job is done. Many of them have very basic needs. It could be in hopes of free food, green parks or even independence. Once these children, in search for ‘independence’, hit the streets, they are at risk of being sexually abused and exploited.”

Iftikhar Mubarak, a child rights activist who has also been associated with the Society for the Protection of the Rights of the Child (SPARC) and SAHIL, said: “Children don’t run away just because their families are poor, many of them are physically abused. Many children run away because they witness violence in their homes. NGOs can do only so much, long term sustainability of such interventions depends on the government’s help.” Even though begging is illegal in the country since 1958 according to West Pakistan Vagrancy Ordinance 1958, the law remains principally unenforced with a massive increase in the numbers of beggars since past decades.

The Asian Human Rights Commissions (AHRC) states that there are 1.2 million children on the streets of Pakistan’s major cities and urban centers. Although according to Child Protection and Welfare Bureau, 39,270 poor and neglected children have been facilitated by the Bureau in six years. No doubt the professional beggars of Lahore are begging with their own choice and they are the real culprits but child beggars in the city are not choosers and they beg involuntarily. Their lives are being controlled by a huge network of beggar mafia. This practice of the mafia violates Article.3 of Constitution of Pakistan, 1973, which makes it obligatory that the state shall ensure removal of all forms of exploitation.

In reality, Lahore is suffering from forced child beggary because of lack social awareness among the silent population. Though citizens are aware of the illegal begging practices but by not speaking up on the human rights they are encouraging them. They are promoting forced child beggary in their own city by not demanding legal justice from the government and legal system. A strong proactive approach is needed in all law-enforcement authorities to protect poor children from being forced into begging. Forced child beggars can be rescued through making of new and improved legislation’s or amendments can be made in the previous one.

Strategies should be developed to reduce forced child begging that treat the real causes such as elimination of beggar mafia. Children should be helped in the short-term circumstances, i.e. they should be provided an access to education and basic necessities of life including health facilities. These children cannot be overlooked because they are the future of our country. We should transform the present children into a more organized world of tomorrow by investing in their attitudes, morals and values. It is the duty of every national to ensure that the future of the country doesn’t just have the right to live, but the right to survive too. In this way we would be able to minimize this forced beggary that we hope for at this moment.

Azam, N. (2011). Beggarization: Beggary as an Organized Crime in Pakistan.

Russia All Set To Colonize The Moon By 2030

Russia All Set To Colonize The Moon By 2030