Apology Panacea to All Problems 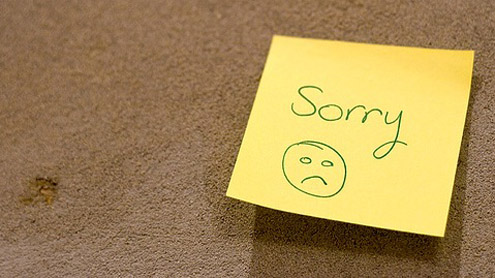 Mankind is created with a body and a soul. The body was created from dust while the soul is breathed into that body by God as the Qur’an testifies innumerable times.

Human creation is different from creation angels or Jinn. So human obviously is not an angel, immune from committing mistake and error. In all the ages he has been subject to committing mistakes, history corroborates.   The Qur’an and the Sunnah acknowledge that “And mankind was created weak”.  The Prophet [pbuh] also said, “Every son of Adam makes a mistake and the best of those who commit mistakes are the ones who seek forgiveness and make repentance.” This is sufficed to prove that no one is perfect.

In addition to Islam, the act of confession within the Greek Church is essentially an apology to God. It has important component of apology. In the Jewish tradition, it has long been the custom to seek forgiveness from family members, friends, neighbors and colleagues during the time of High Holy Days. In ancient time, apology used to be particular law of tribal societies. Although civil and criminal systems are pole a part in today’s globalized world, but still it has power to drop law suits and criminal charges.

Term apology has many fold aspects in life. Each person, regardless of belonging to any caste, culture, creed or geographical area has to meet with errors in his/her life. The correlation of both mistake and apology is inevitable. Some time, due to an error, irrecoverable loss is to be faced and often good judgments come from committing mistakes.  Those who are interested in self-improvement will realize the apology has the potential to change the life and will avoid committing mistakes time and again. That is why a common proverb says,” committing mistake is not a mistake but recurring mistake is a blunder”.  Human life is arena of war and clashes. From father to son, mother to daughter, teacher to student, superior to subordinate, scholar to unlettered, ruler to subject and friend to foe has to quarrel and come at daggers drawn on many socio-poetical, economical, cultural, geographical, religious or educational issues, round the clock.If every issue is taken for granted and unaddressed by mere acknowledging one’s guilt, than life like hell.

Every single day we do things that hurt other and show disrespect, deliberately or in-deliberately. Often we are impatient and rude to our friends, co-workers, argue unnecessarily, say hurtful to partners, misbehave intention and falsely accuse of our offspring of lying etcetc.Victims of emotional, physical or crime are the vivid example of the society. Stated otherwise, every person in today’s world is a uncovered legend and if covered a heart-touching novel.  Healing the wound with modern medicines is possible, but healing the heart and soul is impossible with these material substances. There needs a natural herbal that can cure the man internally and provide eternal satisfaction.  Apology has power to heel the wounds of individual, families, societies and nations as well. Student of history will add me regarding a number of wars won without use of lethal arms and amenities. It mends relationships, south wounds and heals broken hurts. In fact it is a social ritual.

There are obstacles that prevent a person from apologizing to others. Among them is ignorance which is regarded as a dangerous disease. There may be various individual or collective reasons for not begging apology in human history. Common excuse for not apologizing such as, it doesn’t mater; the person did the same thing to me and didn’t apologize; he or she never apologized to me or it is too late etc. The ignorant person does not know the correct teachings of Islam, society etc to confess his / her mistakes toward each other and to apologize for doing it.  Pride and arrogance which are disliked in all the religions, societies and ethos of the world is another reason for not making apology. In fact pride denies the rights of others who are harmed by his mistake as he feels he is superior to them or betterthan them.

Forgiving somebody is also a science to learn. Rashi, rightly said, “one who has begged for forgiveness should not be so cruel as not to forgive”.  Making an apology is difficult, but being on the receiving end can be just a difficult one. On the other hand, some times apology catches off guard and a person does not know how to respond. Therefore, apology should be received, no matte what it is for. To not accepting apology is similar to not accepting a gift. Psychological research and anecdotal evidences show that when some body asks for apology and accepted, gives relief to body and soul, altogether.

Research indicates that there are many barriers to forgiveness. Anger, that melts the heart of a person who is angry. So many people, do not want to give up their feelings of anger in order to forgive and remain constantly either perturbed or disturbed. Secondly, fear, that actually lies within. Fear prevents people from forgiving is that if they trust again, will be hurt again. Thirdly, pride, can prevent form facing own faults and weakness. Fourthly, black and white thinking, the motto is “ if you hurt me once, you are a fool and second vice versa”.

Fifthly, unreasonable expectations of others, is like an empty door. When expectations get continuously too high, disappointment is a fate. Most of people are impatient in all relations and lack compassion and empathy. Hence, instead of asking for apology from others, often people become critical and judgmental and embrace distances. Sixthly, sitting in judgment, is a tendency to judge others harsh and last but not least lack of empathy, for wrongdoers. Self retrospection is a science that often lacks in common man. It is easier to judge others than to remind oneself.

In our modern money-driver and customer-oriented world, apology is treatment to the errors because it fosters compassion. Our character should sow the seed of apology which can prevent human society from decay and destruction. As we saw, no religion professes selfishness, proud, anger, hurting and hunting human nature. The relief of life lies in live and let people live in their own coffins. No soul is responsible for wrongdoing of others. Apology reunites re-institutes and protect millions from wrong doing. It castes a shadow of paradise of heaven on earth. The dire need of time is changing nature of human mind with promising future of peace and tranquility. Our world can get rid of all man-made problems if we believe in science of forgiveness. Apology recognizes the community’s needs for individuals to adhere to certain agreed-upon rules. Let us reconcile, please!