Is Western Democratic System Cause or Solution for Predatory Societies 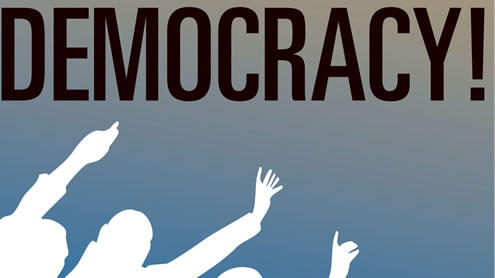 Our politics is a pendulum whose swings between anarchy and tyranny are fuelled by perpetually rejuvenated illusions.

In recent decades, especially after the end of the cold war, there has been much talk about the prospects and usefulness of democracy and democratic values in third world countries, especially China, Iraq, Afghanistan and Middle East etc. United States and European imperialist powers propaganda the democracy to be the best ever system of governance that can solve all the problems of the masses and make them happier than ever. Leaving aside the west’s hypocritical policy of opposing the democratic govts. and supporting the dictators/monarchies where it suits the interests of America and its allies (for instance, in addition to other covert interventions, throwing the democratically elected Govt: in Iran in 1953, in Guatemala in 1954, and in Chile in 1979 , while backing the host of right-wing military and monarchy dictatorship that took “their side”, and Franklin Roosevelt’s famous words to justify the support for Nicaraguan dictator Anastasio Somoza ” He may be a son of bitch, but he is our son of bitch”, best explain this.) and trumpeting the buggle of democracy where they have ideological/political conflicts, for instance, with Iran and China, we have to see is democracy really suitable for predatory societies like ours ?

On the 4th death anniversary of (late) Benazir Bhutto (27th Dec., 2011), Mr. Zardari also vowed to defend the federation, constitution like Suu Kyi and urged the people to foil all the conspiracies against democracy. But it is not clear that what he meant by the term “democracy”, when he urged the people to defend it. Because, at the same time he also said that he would not resign in the face of numerous crises building around him. Was he confusing the democracy with his own persona? The main questions that arise in the mind is that if the democracy another colonial ploy (a puzzle that can never be solved) to keep the people enslaved after the end of direct colonial rule? Will the terms “constitution, parliament, elections, right to vote, Govt., opposition, freedom of expression etc.” just remain as vague for the vast majority of people, as they were, before they heard about them for the first time? The vast majority of the simple folks living in the third world countries (except some drawing room chatters) even don’t know, if they are party to a social contract written between them (as one party 0 and states (the other party) that exist in their name.

Is democracy just a new name for old kingdoms? Because this system has not changed the fate of the people or served their interests (except some cosmetic changes ) in any meaning full way since it replaced the kingdoms in most parts of the worlds after the end of direct colonial rule. In many countries this system has been performing very poorly and, in fact, was quite “illiberal”, if it could be called democracy at all. Since the introduction of this system of governance in many third world countries (after the world war-II) what people have actually been experiencing is a mix of distressed governance, abusive police force, domineering local oligarchies, incompetent and indifferent state bureaucracies, corrupt and inaccessible judiciaries, and venal ruling elites contemptuous of the rule of law and accountable to no one but themselves. As a result, people – especially in the bottom strata of society, which in many new democratic countries comprised the majority, are citizen only in the name. Most third world countries, even a half century after the onset of decolonization are mired in poverty, stagnation, misery, violence, and disruption. Usually, lack of resources is described as a reason for this untoward situation. But that cannot explain why some of the richest African countries including Nigeria and Angola performing so dismally?

Ordinary people are not truly citizens but rather clients of powerful patrons who themselves serve as clients to more powerful patrons (American and other capitalist countries as well as World Bank, I.M.F. etc.)

If participation in processes and systems such as voting for parliaments and protesting on the streets can be called the democracy then there is democracy in many parts of the world. Yet in practice, internal party elections, internal democracy, account-keeping and transparency remain ceremonial and often, just plain deceptive. Big democracies, for instance, U.S.A. and India are rife with contradictions. On the surface they preach democracy, freedom, liberty and human rights, yet these attributes are only fitfully real. They are bluff and bluster. Post motem by historian reveal that deep flaws existed at the cores even as surfaces dazzled. Most of the so called democratic countries combine the formal architecture of modern bureaucratic state — constrained in the theory by laws, constitutions, and other impersonal rules and standards— with the informal reality of personalized, unaccountable power and pervasive patron–client relationship. And informal norms always trump formal rules and restraints. Thus, “the right to rule…..is ascribed to person rather than an office” making democracy look like a kingdom with some cosmetic changes. Larry Diamond writes in his book, The Spirit of Democracy:

In the United States of America, electoral competition has become so disfigured by the scientific gerrymandering of electoral districts that only about a tenth of the seats in the House of Representatives are competitive. In the European Union, political corruption and favoritism remains so entrenched in the process of government contracting that one new study labels it ‘ the best system money can buy’ (page 24-25). According to Machiavelli men are very easily corrupted and in nature become transformed, however good they may be and however well taught just for the sake of small advantages. So, the argument, that democracy will take time to hold ground in third world countries and, hence will start yielding fruits in the long run as people become more educated and democratic practices more entrenched in the society, cannot be more shallower. what is the problem with the democracy that it is not even working in the U.S.A. (the so-called champion of liberty and human rights and welfare) According to Kettering Foundation (an organization working for the cause of democracy), overwhelming majority of participants, in a discussion arranged it, believed that elected officials “are more responsive to special interests and lobbyists’ than to public interest. Similarly, sharp declines in trust in governments and in politicians have been evident in Europe as well. Increasing majority of Americans feel that there is something wrong with the way their democracy works In Transparency International 2006 annual ” Corruption Perceptions Index “the united states was tied (with Belgium and Chile) for twentieth place, ranking behind Hong Kong, Japan and France in controlling corruption.

So, the question is that if democracy is not working even in America and Europe, where democratic values are so much emphasized upon, how it can work elsewhere, especially in the third world countries like Pakistan. Is democracy not just a facade and actual rulers are the powerful corporate world’s C.E.Os/C.F.Os. Whose policies are implemented by nearly every government on earth, be it a democratic government or an authoritarian one. And finally, free media (as is supposed) is also part of the problem and not the solution. As it is also subservient to commercial interests. Hence, it is actually avarice that is ruling the world in the shape of capitalism and not the people in whose names are governments formed. This also explains that why an efficient, comfortable, safe and smooth railways system beneficial for the poor masses has given way to an anarchic road transport system in Pakistan. Multinational car/bus manufacturers are forcing the government to build roads, flyovers, underpasses, wide high ways and motor ways, so that there should be enough space for the 5000 additional cars being released daily from the factories. And majority of pedestrian and bi-cycle owners (probably, 90 percent of population in Pakistan) are at the mercy of anarchic traffic and transport mafia. They don’t even have the right to walk or cycle on the roads in this Islamic (or banana?) Republic of Pakistan.

However, in addition to having different names, the only other difference between the 21st century democracies and old kingdoms or princedoms is that kings were, at least, not puppets as are today’s politicians in the hands of corporate giants.

Absence of Political Will