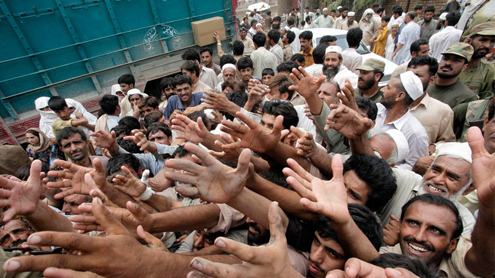 The overall situation in our country is getting miserable day by day. Everyone seems alarmed except those who are responsible for it.

Absorbitant increase in prices of essential daily consumable items is continuous and the burden is simply unbearable for the common citizen. It is a time for the strategic planners and policy makers to think over it, and initiate measures to control the situation? Without doubt the people have borne enough and if no steps are taken by the state actors, there is every likelihood that the stressed citizens will react in a way that can be terrifying for all.

What is a reward that democracy yields to a common person?  The lollipop of democracy is only bringing forth stress, difficulties and virtually no facilitation in their lives. I am of the opinion that democracy is in fact crushing and causing immense distress in the lives of those who supported democracy and rendered sacrifices for it. A common man in the country has a firm belief that this system may change their life for the better, which I think is impossible. This system is based on the power of wealth, and authority and a common person is merely a tool in the process. Every political leader of the country claims to be a champion of the so called system, “for the people, by the people and of the people”. I think it is a political game that is played with the aim of yielding fruits for the benefit of the elite class of the society. For them this land is of the pure is their property only.

Legal system is required to provide a platform to run the country in accordance with constitutional reforms. The Courts serve as a means to ensure rule of law and when that is not visible, the average citizen only feels depressed and frustrated and his love and regard for the country wanes.

According to the Plato, Justice in a society is like a blood in the human body if it is sucked the human will die setting in motion destruction of the society.

In Pakistan the rule of “Law” is nonexistent. On the road, in any market, in public offices one can actually feel the lawlessness prevalent all around. Insecurity is the order of the day causing a state of misery and absolute helplessness. The result is an extremely poor state of mind that is upsetting.

Every country is run by the tax collected from the people. It is a moral responsibility of every one to pay it for the development of the country and government to utilize it for the betterment of the people. In Pakistan government is misusing the power of imposing taxes and levying them without hindrance, thereby causing a feeling of helplessness and dismay. In the process the blood of a common man is being drained while the influential and prosperous ones like the Industrialist, Feudal lords, leading remain beneficiaries as they avoid the taxation loop.

So I think only “One Way” is left is, “End the Game of the Exploiters”.  Allama Iqbal so appropriately summed it up in these words!