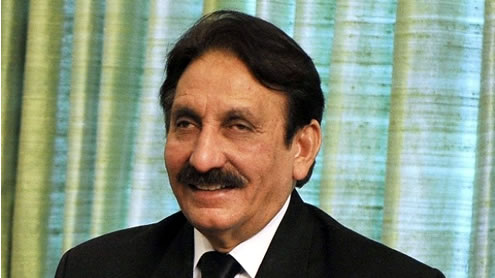 Chief justice of Pakistan is due to retire on December 12 and wary government officials are counting the days until he hands over an invigorated Supreme Court to a more conciliatory successor.

Outgoing Chief Justice Iftikhar Chaudhry has made the court Pakistan’s third power center, alongside the army and fledgling civilian government. But he has made many enemies along the way. Chaudhry and his judges have frequently and successfully challenged the government. He has even taken on the military, an unprecedented challenge to Pakistan’s most formidable institution. Supporters say Chaudhry has cracked down on corruption and fought for human rights in the nuclear-armed US ally of 180 million people.

But critics accuse him of overstepping his authority, parlay sing government and undermining democracy. Chaudhry’s successor, Tassaduq Hussain Jillani, nicknamed “the gentleman judge” for his mild manner, is expected to maintain the court’s focus on rights but steer clear of intervening in government policy. “He is the opposite of the current chief justice,” said retired Supreme Court judge Nasir Aslam Zahid. “He’s very mild, he hears all sides, he does not lose his temper.” The judicial handover will be the last in a year of orderly transitions for coup-prone Pakistan. A May general election marked the first time one democratic government handed power to another.

The powerful army chief steps down this month. Lawyer and rights activist Asama Jahangir said the new chief justice would preserve improvements that Chaudhry had introduced but the top court would be less combative. “The judiciary will stay independent but there won’t be such undermining of other institutions as there is now,” she said. Jillani, a dapper lover of poetry, antiques and films, is related to the new Pakistani ambassador to the United States and a former prime minister who Chaudhry forced to step down last year. He has largely avoided the high-profile political cases that Chaudhry has rebelled in and he has called for judicial vigilance to be tempered with restraint.

“If the courts fail to maintain this delicate balance, none else but people’s confidence in the judiciary would be the worst victim,” Jillani wrote in a recent ruling. Confidants say Jillani often refers to a warning from the International Monetary Fund (IMF), that constant judicial intervention had weighed on an already stagnating economy. When staff of a privatized bank challenged redundancies, Jillani ruled it was “for the bank management to decide about the usefulness of the employees” – an unusual ruling in a court known for its populist judgements. Under Chaudhry, judges intervened in everything from traffic regulations to civil service appointments.

Foreign investment dwindled as deals got tied up in court. To the delight of many Pakistanis struggling with rising prices, Chaudhry recently froze increases in taxes and electricity tariffs that the cash-strapped government needed to plug a gaping budget hole and qualify for an IMF loan. The government, fed up with seeing decisions overturned, has put off filling 70 posts, including law minister and the heads of state energy companies, until Chaudhry retires. Chaudhry has challenged such appointments before. He has made record use of laws that allow top judges to open a case without a complainant.

Each day, he scrutinies press clippings for possible cases and reactions to rulings. “He’s decided to interfere in every goddamn thing under the sun,” complained one lawyer, who asked not to be identified. The media-shy Chaudhry does not give interviews but he said in a recent speech that he considered the Supreme Court to be the protector of the common man. His critics are cautious. Journalists, lawyers, and politicians have all been charged with contempt of court. Even Chaudhry’s fellow judges are reluctant to disagree.

Chaudhry’s bench has issued unanimous rulings since 2009, highly unusual for top judges, said lawyer Fawad Chaudhry, who is not related to the chief justice. Chief Justice Chaudhry burst into prominence in 2007 when he resisted then military ruler General Perez Musharraf’s bid to cling to power. It was unprecedented defiance of the military by a judge who until then seemed an unlikely rebel. Musharraf sacked him, triggering street protests by black-coated lawyers. Their anger galvanized opposition to Musharraf, who stepped down as president just over a year later after his allies were trounced in an election.

Chaudhry was later restored to the Supreme Court in triumph. Since then, he has taken on all comers. One of his most celebrated fights has been with the military security services, demanding they reveal the fate of thousands of missing people. Many were detained during operations against separatists in Balochistan. Generals have appeared in court, along with a handful of tortured prisoners, though no one in the security services has resigned or even been charged over the disappearances.

“The courts listened to us compassionately and did what they could but many times their orders are not obeyed,” said Amina Juana, who represents families of the missing. She hopes that the new chief justice might have more success in challenging the all-powerful military. But, she said, even the courts know their limits. -Dailytimes