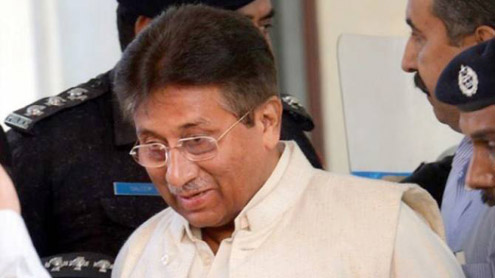 While seeking high treason trial against former president Pervez Musharraf under Article 6 of the constitution exclusively, the prosecution may focus more on the Provisional Constitutional Order (PCO) of November 3, 2007 than the preceding Proclamation of Emergency, which had furnished ground for the PCO.

Experts say the prosecution will need to hinge the case on the state of emergency but it may not much dwell on it which may broaden ambiance of the case, a thing government would like to avoid for an early decision. The complaint filed by the FIA under the auspices of the Federal Interior Ministry with the Supreme Court is for initiating sedition case only against Musharraf, had proclaimed state of emergency after consultations “with prime minister, governors of all provinces, and with Chairman Joint Chief Committee, Chiefs of Armed forces, Vice Chairman of Army Staff, and the Corps Commanders”.

Later, various reports revealed that the then cabinet led by Prime Minister Shaukat Aziz and the chief ministers were also taken on board on the imminent move. Musharraf had issued the PCO in his exclusive capacity as Army Chief on the basis of the preceding decision wherein he deposed about 60 judges of the superior judiciary and held the constitution in abeyance. Looking through the PCO, the onus of the subsequent treatment meted out to the judges is on Musharraf than others as they were not privy to the Order, which in our national history has been peculiar to the dictators only.

In terms of the constitution, he could have acted as president to proclaim emergency as such the judicial bench while determining maintainability of the complaint in the first instance, may take into account the motive of the army chief to proclaim this state. It may be mentioned here the PML-Q was the ruling party at that time and had banker-tuned-politician Shaukat Aziz in the Prime Minister office. Among the eminent persons in his cabinet included Aftab Ahmad Sherpa as the Interior Minister, Zahid Hamid Law Minister, Sheikh Rashid Ahmad, Minister for Railways, Tariq Azeem Khan, Minister for Information, Khursheed Mehmood Kasuri, Foreign Minister, Hina Rabbani Khar, Economic Minister, Dr Attaur Rehman, Adviser to PM on Science and Technology and Javed Ashraf Qazi, Education Minister.

In Punjab, Ch Pervez Elahi was the chief minister while former Lahore Corp Commander Khalid Maqbool enjoyed the governorship. Dr Arbab Ghulam Rahim was the Sindh chief minister while Dr Ishratul Abad, governor. Similarly, late Jam Mir Muhammad Yousaf was Balochistan CM and Nawab Zulfiqar Ahmad Magsi served as governor. In Khyber PK (then NWFP), a caretaker CM was in the office while Awais Ahmad Ghani was the governor. On the side, Air Chief Tanvir Mehmood Ahmad was the Chief of the Air Staff, and Admiral Muhammad Afzal was the Naval Chief.

Lt Gen Tariq Majeed was the Chairman Joint Chiefs of Staff Committee, Lt Gen Ashfaq Parvaiz Kayani, then Vice Chief of Army Staff, Lt Gen Salahuddin Satti, Chief of General Staff and Lt Gen Nadeem Taj, DG ISI. Judicial experts say if the government has to prosecute Pervez Musharraf alone, an extreme care would need to be observed to ensure that the heat of the alleged offense remains to one man and the proofs and evidences from the prosecution side also directly incriminate him excluding everyone else. The prosecution as such, may be on a tight rope, and if the scope of the trial spills over to others, the case against Musharraf may be vitiated. -Nation