Wailing for the Terrorists 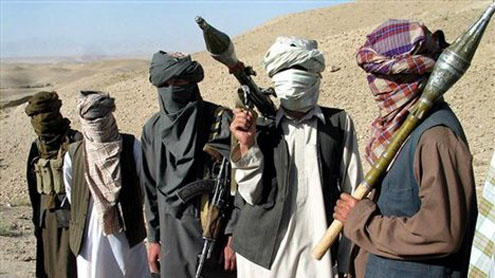 It is rare that a country’s top leaders are seen virtually bawling over the death of its enemy number one. But Pakistan’s Interior Minister Chaudhry Nisar Ali Khan and the chief of Pakistan Tehreek-e-Insaaf (PTI) Mr Imran Khan did pull that off.

The two leaders have led the national wailing over the killing of Hakeemullah Mehsud and his cohorts in a drone attack on his house in Dande Darpa Khel village, North Waziristan Agency (NWA). The two Khans made it sound like a helpful boy scout and not the ringleader of the Tehreek-e-Taliban Pakistan (TTP) had been assassinated. The most brutal terrorist is being presented like an apostle of peace who was about to lead his country to the Promised Land. And, of course, the big bad US is the vicious villain according to the Interior Minister and his former college mate Mr Imran Khan.

The lamentation for Hakeemullah Mehsud and the vitriol against the US is literally a replay of how Pakistan and its leaders had reacted to Osama bin Laden’s 2011 killing. After bin Laden’s death there was a lucid interval of a few days where the then president Mr Asif Zardari and his close aides sought to take the opportunity to make a clean break with Pakistan’s dubious past association with jihadist terrorism. But they could not withstand the drummed up anti-US sentiment and caved in. The leaked bin Laden Commission Report, which has still not been released by Pakistan, essentially identifies the US, not bin Laden or the terrorist outfit(s) he sired, as Pakistan’s enemy number one.

The report said that the US had “acted like a criminal thug”, and it termed the US raid on bin Laden’s lair “an act of war”. Similar rhetoric was codified in the September 9, 2013 All Parties Conference’s declaration that condemned the US actions as “illegal and immoral” and responsible for the terrorist ‘blowback’. The same document, which elevated the murderous thugs like Hakeemullah Mehsud to ‘stakeholder’ level and threatened to take the drone attacks issue to the UN, now serves as the guideline for negotiating peace with the TTP.

A pathological lack of insight into Pakistan’s own role in creating the terrorist monsters and then dragging its feet in countering them, along with a rabid anti-Americanism, is the centrepiece of Pakistan’s response to Mehsud’s killing. The Pakistani leadership is unwilling to even acknowledge that Mehsud was a ruthless killer, responsible for slaughtering thousands of innocent Pakistanis. In their zeal to take the drone issue to the UN, Pakistani leaders ignore that Mehsud had planned and ordered, from Pakistani soil, the December 2009 attack against the CIA’s Chapman base in Khost, Afghanistan that killed several Americans. The attack was the prime example of collaboration between the TTP, al Qaeda and the Haqqani terrorist network (HQN).

The Jordanian double agent, Dr Humam Khalil Abu-Mulal al-Balawi alias Abu Dujana al-Khorasani, trained with the TTP in the areas of NWA under the HQN’s control. Al Qaeda was the first, in January 2010, to applaud the attack but interestingly did not claim direct responsibility, saying that appropriate groups will own the attack. The attack was then claimed by the TTP in a video(http://youtu.be/RTZQTC6ucVI) released by its propaganda wing Umar Media in which none other than Mehsud himself flanked the suicide bomber Abu Dujana. Mehsud also orchestrated the May 2010 Times Square attack by Faisal Shahzad which, according to Bob Woodward, would have entailed a formidable US response had the bomb gone off. Woodward had noted that up to 150 terrorist targets could have been bombed in response to a catastrophe that only luck had averted.

Pakistan did little or nothing to put Mehsud out of commission in over two years after the Times Square attack. It appears that Mehsud continued to enjoy sanctuary in the territory virtually ceded to the HQN by Pakistan in a compound not far from an army garrison. The so-called bad Taliban thriving under the wing of the good Taliban a la HQN underscore the problem with Pakistan’s piecemeal fight against terrorism. Combine that with the political shrieking over Mehsud’s death and it is safe to predict that Pakistan will botch another opportunity to rally against the TTP when that terrorist cohort is weak. The leadership transitions in the TTP have never been smooth. When his predecessor Baitullah Mehsud was killed in a drone attack in 2009, the Mehsud faction fought the rival and later his number two, Waliur Rehman Mehsud.

Both terrorists were reportedly wounded. Ultimately, Sirajuddin Haqqani arbitrated and Hakeemullah Mehsud became the TTP’s emir. There now is a three-way tussle within the TTP between the Mullah Fazlullah, Khan Said ‘Sajna’ and Asmatullah Shaheen Bhittani groups for Mehsud’sslot. Bhittani was tight with the Lashkar-e-Jhangvi (LeJ), is among the founders of the LeJ al-Alami, and had masterminded the December 2009 attack on the Muharram procession in Karachi that killed 45. He has been appointed the interim TTP chief.

Pakistan had a chance to capitalise on this gain and bolster its negotiating position by further degrading and decapitating the TTP when it is certainly down. But that would have required a resolve not just to take the fight to the terrorist group but to also brace for their retaliation by rallying the nation. The Pakistani political leadership, especially Prime Minister Nawaz Sharif, does not appear disposed to taking hard decisions. Mr Sharif has let his Interior Minister and Mr Imran Khan set an extremely harsh anti-American tone, which he will find difficult to scale back.

Whether or not the belligerent Mr Khan can block the NATO supply route, he has succeeded in mainstreaming and deifying a merciless killer. Chances are that the sectarian mass murderer Asmatullah Bhittani will get the same white-glove treatment from the Pakistani leaders. Routed in the elections swayed by the TTP, the secular leadership is too weak and fearful to counter the pro-Taliban narrative. Even if some in the military helped take out Hakeemullah Mehsud, the security establishment itself will keep playing footsie with the ‘good’ Taliban. Pakistan’s counterterrorism policy, strategy or even tactics are unlikely to change soon.

The US will remain a convenient piñata for a country that does not want to face its own demons. The US must cover all legal bases but should not cave in to the predominantly Punjab-based Pakistani wailing over the most wanted terrorists from Osama bin Laden to Hakeemullah Mehsud. As a Pashtun tribesman summed it up: -Dailytimes