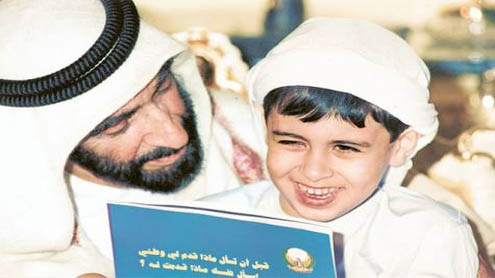 Sheikh Zayed bin Sultan Al-Nahyan is the undisputed founder of the United Arab Emirates, which has grown from poor sheikhdoms under the British control to one of the richest countries in the world today.

With a vast oil wealth, the UAE — a confederation of seven emirates — boasts of the highest per capita incomes and is one of the fastest developing countries.Zayed was the ruler of Abu Dhabi when the union was announced. Before becoming the ruler of Abu Dhabi, he was the governor of Al-Ain province, which had practically nothing to boast about and relied on a very small subsidy by the British, which had helped develop its oil wealth under the then ruler Sheikh Shakhbout bin Sultan Al-Nahyan. However, the country did not witness much progress under Sheikh Shakhbout reportedly due to his cautious approach, preferring to save the revenue rather than investing it in development. His brother, Zayed, saw that oil wealth had the potential to transform Abu Dhabi.

The ruling Al-Nahyan family decided that Sheikh Zayed should replace his brother as ruler and carry out his vision of developing the country.In l968 I visited the region, landing in Dubai, which had a small but nice airport. After meeting with Sheikh Rashid of Dubai, which was a modern metropolis compared to Abu Dhabi and other emirates, I sent a telegram to Sheikh Zayed requesting an interview on behalf of the United Press International.Within a few hours, I received a telegram from the royal palace welcoming me to visit Sheikh Zayed at his palace in Al-Ain province. He also sent me a car to drive me all the way from Dubai and back.

Apart from the sheikhs or sultans of Southern Arabia where I was born and brought up, and which was called the British Protectorate, Sheikh Zayed was the senior most ruler I met and interviewed and certainly one of the finest men I had met. Despite his vast wealth estimated then in the billions of dollars, he was modest and lived modestly with very little ceremony and spoke to me with kindness asking me to stay for dinner where his favorite dish was served, Arabic bread, honey, meat and fish.On one occasion when I wanted to see him, one of his courtiers Batti Ibn Bishr told me where he would be and when I walked in I saw him sitting on the sand with other courtiers in the moonlight without any pillows. He was that simple.

But that did not mean he was not spending lavishly on his people and his government. Indeed he was one of the most generous men in the world and I was witness to that. On one occasion in Abu Dhabi hundreds of tribesmen from his domain and from neighboring Oman gathered near his palace and started chanting praises of him hoping to attract his attention. He sent his personnel with heaps of cash to distribute among them. At that time he was using Bahrain’s currency before printing his own money. News traveled fast about his largess and more tribesmen arrived and more money changed hands so much so that the agency I was representing — UPI — wondered by cable if that was truly the case and I said yes indeed it was as that was the first time any leader had given away so much cash to so many people in the open air.

In a few months time, he ordered the building of a guesthouse for the tribes visiting Abu Dhabi. It was called Mudheef Al Bedu meaning guesthouse of the Beduin tribes in Arabic.There was another one for other guests including foreign visitors. That was where I stayed throughout my visit with full board. During my stay King Hussein of Jordan stopped by on his way to Pakistan and visited the sheikh who gave him a huge gift of money as Jordan was in need of assistance. I do not think Zayed even cared for a receipt.

When he launched his construction and development plan, he also opened the gates of the emirate to everyone who wanted a job ranging from a surgeon to a street cleaner. Hundreds of thousands flocked to Abu Dhabi causing an acute shortage of housing not only in Abu Dhabi but also in the other emirates. A foreign civil engineer told me that at one time the region looked like one big construction camp.

Zayed was not only a builder of towns but also a lover of gardens and gardening. His love for greenery transformed Abu Dhabi and Al-Ain and the 120 kilometers separating the two into gardens and orchards in a short time. He was so fond of trees that the municipality banned the cutting of any tree anywhere. I once had my hair cut in a saloon that had a palm tree in the middle because it was set as a condition for obtaining a license for setting up the saloon. The stringent laws worked and on my next trip, I found the capital and surroundings almost covered in green despite the huge cost to the state.

Soon enough other states like Dubai and Sharjah followed suit and the UAE transformed into one lovely garden.During Ramadan Zayed would tour his capital driving a Mercedes car and would stop near gatherings of people playing or chatting, talk to them and then ask them questions or pose puzzles for them to solve. He would then hand out cash prizes to them and laugh heartily with them from his driver’s seat. I once counted several such surprise visits in one night and saw him ask questions and laugh and give away bundles of money.

At times he would be driving outside the capital and would stop over for anyone waving to him wanting to talk to him. Once a man stopped him and reminded him that he had been his comrade in the army. He remembered him well and handed him a handful of money on the spot. Perhaps no other head of state had had that kind of spontaneous response and simplicity. He enjoyed himself as he helped others on the spot not waiting for the paperwork routine to answer the requests of his subjects in cash or kind.Zayed was born in l918. His father was the ruler of Abu Dhabi who was assassinated in 1926. The state was part of the seven so-called Trucial States in treaty relations with Britain their rulers having signed a number of maritime truces with Britain in the l9th century. – ArabNews

US embassies to shut on Sunday over ‘security threat’