The Boston that I knew… 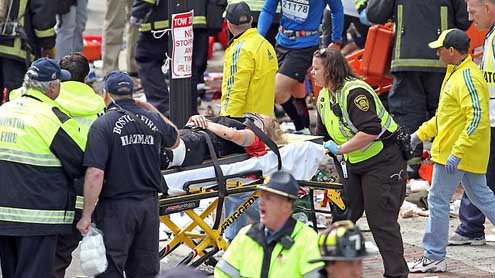 I never expected this in a hauntingly beautiful old city where I came of age, that place where people like me from all over the world gathered to gain knowledge. They came over the centuries to trade ideas, and they came to reinforce universal ideals such as freedom of speech and movement. They came to challenge one another’s ideologies, to be sure, but they did not come to assault innocent human beings.

After Monday’s bomb blasts during the Boston Marathon, my assumptions about the Boston that I knew at a different time and at a different age were suddenly called into question. Many decades ago, when times were politically fraught and global cultural tensions were on the rise on account of the Vietnam War, I attended a university in the Boston area. I had come from a relatively conservative background in Mumbai – where few students protested in those days. In Boston, however, I was at once struck by how strident students were about the war, how quick they were to defy authority, and how ready they seemed to protest against perceived excesses of the United States government in Southeast Asia.

There were, of course, the occasional acts of violence: throwing stones at policemen, a bank robbery or two by radical youths – these were called “people’s withdrawals” – and, of course, the widespread pamphleteering that had been in traditional in Boston since the 18th century, when American rebels fought for independence from the British. There were loud demonstrations in Boston Commons, and as a reporter for my student newspaper – “The Justice,” produced at Brandeis University – I covered many of the marches. I still recall the burning in my eyes from the tear gas pellets of anti-riot police.

But even in those days when a great nation’s foreign policy was being challenged domestically, there was nothing like the attacks on innocent people on Monday, when three people, including a child, were killed, and scores of amateur participants in the annual Boston Marathon were injured. If there was a compact among the protestors of my day in America, it was this: You do not assault your own. You certainly do not assault the innocent.Is there any longer any such a compact? Times are different. Where once America used its forces to fight in foreign lands for causes that made little geopolitical sense – and it still does, although nowhere with the scale and intensity of the conflict in Indochina – now foreigners are militantly bringing their grievances to American shores. The events of 11 September 2001 are forever sketched in our collective memories.

In the long hours since the Boston blasts, I spoke with classmates from my days in Boston. Some of them had been radicals themselves in our time, but later found themselves transformed into successful professionals and entrepreneurs and academicians. Life has a way of metamorphosing even the most vociferous young.What was naïve, perhaps, was our belief that what Boston taught us during those long-ago days of our youth was something also assimilated by others; what may have been naïve was the assumption that others would not develop a different agenda in life from ours. Ours was an agenda of positive change, of uplifting of the dispossessed; theirs, as the Boston marathon tragedy showed, was one of brutality against the helpless.But no matter what the vicissitudes of life, I am still glad that I came of age in Boston, and that it taught me what it did. – KahleejNews