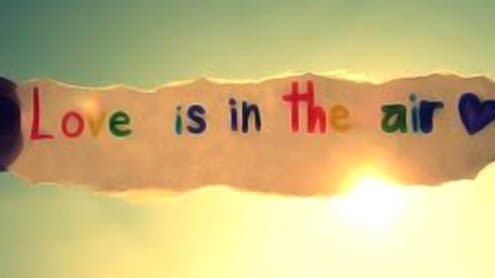 It’s that time of the year when love disturbs the ratio of nitrogen, oxygen, carbon dioxide and argon in the air, and diffuses into all parts of the atmosphere.

A few outmoded and mentally challenged environmentalists opine that this annual diffusion can result in a severe lack of hayadrogen. However, regardless of the impact of Valentine’s Day on Madrassosphere, Jamaatosphere or Talibanosphere one can’t deny the presence of love in the air.While the fluctuation in air instigates venomous antagonism in a few spheres, other spheres are witnessing a wide gamut of romances. And so, let’s pay tribute to some of the most remarkable love stories that came to the fore over the couple of weeks leading up to Valentine’s Day.

It was more of a fling than anything long-term, but it was passionate for every bit of the 9.47 nanoseconds that it lasted. Many a matchmaker has touted the couple as a ‘match made in heavens’ considering their overlapping interests; for example, ECP’s overhaul, government hatred, lung-busting revolutionary chants, hollow rhetoric, and narcissism. But any long-term relationship has never really been on the table owing to the size of the egos of IK and TuQ, equivalent to Southern Elephant Seal and Chinese Giant Salamander respectively. Following their moment of passion last week, IK and TuQ have gone on their separate ways and settled on being friends with benefits instead.

This is a love story that late Yash Chopra would have splurged the dough on to make one of those epically overrated, “timeless” cheese-fests that he specialised in. Like Shahjahan constructed Taj Mahal for Mumtaz Mahal, Shahbaz has conjured the Metro Bus for Lahore – the former touted as one of the wonders of the world; the latter peddled as one of the massive blunders of the world. While Shahbaz is believed to be extremely popular with his sweetheart, whether the two remain bonded together depends on how Lahore feels about her lover’s extravagant gesture. Even so, a break up in May is pretty much on the cards.

If you’re looking for a consistent relationship you won’t get any better example. The central bank’s love affair with delusional targets goes back to the days of its inception, but it is in the recent past that the SBP-UT bond has peaked. Having missed the growth target of 4.2 percent for the previous fiscal year by 0.5 percent, SBP –daredevil that it is – set the bar higher aiming for 4.3 percent this time around. Targeting the restriction of fiscal deficit to 4.7 percent of the GDP is another noteworthy manifestation of this unrelenting love, with a deficit of 3.2 percent already being posted in merely the first half of the current fiscal year.

Cameron has never really tried to hide the little crush that he’s had on Taliban over the past three years that he’s been in office. Even so, it’s no coincidence that his feelings peaked with Valentine’s Day just around the corner. While most of the world takes a nosedive into scepticism as soon as the Taliban are mentioned, Cameron was pretty vocal about his love when he asked the Taliban to enter talks regarding the future of Afghanistan.

The Pakistani cricketer’s love affair with old balls goes back to the time of Sarfaraz Nawaz, but this is one of those romances that are spread over generations. Be it with the bat or the ball, the Pakistani cricketer feels at home when the shine goes off. When he is bowling, the old ball helps him reverse swing or prodigiously spin the ball. And when he bats, it helps him not act like a petrified chicken, as showcased by the lovers’ latest rendezvous in South Africa. At the time of writing Younus Khan and Asad Shafiq were showcasing their PDA with the old ball for the fifth-wicket stand in the second Test.

This is one electrifying relationship that has stood the test of time, and the norms of society. Raja was allured towards electromagnetism owing to its monetary potential in 2008, but as things went on he couldn’t escape the electromagnetic field. The magnetism of Raja’s sweetheart is such that five years down the lane the PM is still bewildered and entrapped by electromagnetic induction. It seems as if he’d be handcuffed pretty soon in a high-profile wedlock.

Ever since Pope Benedict has met Twitter his focus on his job has gradually diminished. Now with the Pope resigning from his post ostensibly owing to concerns over his health, the world knows the real reason behind the decision. Expect the Pope’s tweets and retweets to soar as he gets even more active on Twitter.

Saving someone’s life is an absolute nailed-on way to win the person’s love, but that does not seem to be the case in this unfulfilled love story. Zardari claims he saved Sharif’s life 14 years ago, but the latter crudely parried away the former’s invitation of a date on Valentine’s Day. The caretaker setup was supposed to be the topic of the day yesterday, as Zardari had set his heart on wooing Nawaz. The PML-N chief was having none of it, as he continues to play hard to get.

The love story surrounding IP pipeline has been mentioned in this space before but the romance has exploded again recently with both the lovers resiliently refusing to bow down to external pressure. The uncle from Washington is out of ideas now since his endeavours to outlaw Iran isn’t stopping the nephew from going out with Iran and the proposed trophy girlfriend (the Turkmen beauty TAPI) is proving to be too high-maintenance for Pakistan’s liking. Pakistan seems like accepting IP as its lawfully approved gas pipeline, to have and to hold, from this day forward, in load shedding and in abundance until Uncle Sam do us part. – PT