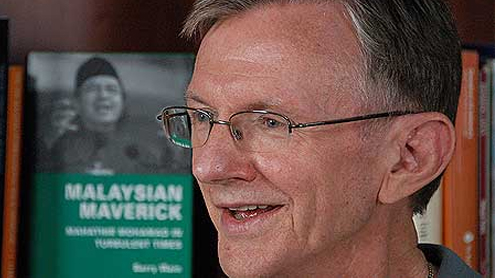 It’s uncertain whether Asia will come to entertain many Western journalists that tried harder to understand their region, their ways and their history than Barry Wain.

The other day the former editor of the once Hong Kong-based Asian Wall Street Journal (also deceased) died at 69, but left behind a legacy of a standard of reporting and editing that exemplified professional journalistic norms at their best. And, of course, we don’t always see that in our journalists, do we?

It must be admitted that even as I fondly wish I were half the journalist that this Australian-born workaholic was, I must also admit that we did not always agree on things. He felt my little book of conversations with Malaysia’s Mahathir Mohammad, the long-running former prime minister, was sinfully short on the corruption issue; and I felt his long and painstakingly detailed book (Malaysian Maverick) was, for all its greatness, sinfully short on the vital Muslim-governance issue.

No matter: Yet journalists are by definition sinful types, in large part because our work forces us to move at blinding speed and we do not have the forever time of the historian.  And so we apologise. But our apologies are somewhat insincere, to be truthful. After all, by the time the historian has harrumphed her or his judgment, the government under study has been long toppled or the civilisation left in history’s dustbin or the issue made moot or the world stage well onto the Next Big Thing.

So the best journalism has nothing to apologise for. It goes public at a time when people are actually interested in the event or the issue, and seeks to put it into some kind of economic, cultural or historical context, while knowing that the journalistic game is necessarily a rough history on the run and injuries are bound to occur.Wain was better at avoiding error than almost anyone, and one wishes his thoughts had been included in a terrific new book, just published, titled My First Trip to China. Dozens of contributors, many of them well-known, have had stories and essays reprinted of their accounts more or less at the time, or in retrospect, of the first time they set foot on mainland China.

Because many of these tippy-toe experiences occurred four decades ago, China was then present-or-post Mao—but definitely pre-Deng Xiaoping. The great economic switch away from a pure state capitalism to “socialism with Chinese characteristics” (whatever that may mean) had not yet taken place. The retrospective essays in this book were as if the first astronauts had set foot on Mars without knowing how much frozen water lie underneath waiting warm stimulus.

The list of authors in this book, edited by the redoubtable Kin-ming Liu (now on the staff of the South China Morning Post), reads like a who’s who. But, pardon my bias, I found the best writing—and maybe clearest thinking—coming from the journalistic contributors. One of America’s finest prose stylists and most respected China-waters (and former dean of the graduate school in journalism at the University of California at Berkeley, which is – by the way—one of our few truly good ones) is Orville Schell.

And you can count me in on that. Compared to every single journalist, academic and businessman contributing to this richly readable and informative collection, I was a very-come-lately to Asia and China, which took me until 1996 to visit. And so my remedial re-education, as it were, included reading the works of the greats like (to mention just a few from this book) Perry Link, Jonathan Mirsky, Frank Ching, Roderick MacFarquhar, Jerome Cohen, Ezra Vogel, Andrew Nathan, James Mann and, well, Barry Wain.

To be sure, for the last phase of his life, Wain luxuriated in the special thinkers’ club known formally as the Institute of Southeast Asian Studies in Singapore. China was not his beat. But his standards of reporting and analysis were as one I solidarity with those of the best journalists in My First Trip to China. Yes, it’s ironic to be taking notice of what’s good about journalism on the occasion of the death of one of its best. But it’s in the nature of what journalists do that we rarely have time to stop and take a look at ourselves. On the other hand, there certainly are a lot of pluses in that! – KahleejNews