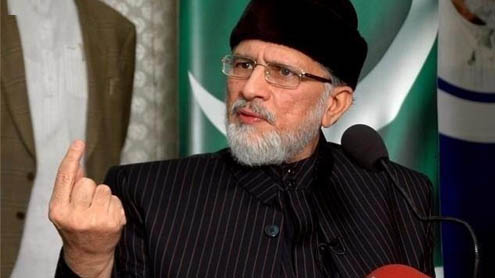 No walks or marches any more in Pakistan, people are too tired and prefer to sit in to register their protest. “Allama Tahirul Qadri has inspired even his enemies to stage sit-ins to voice their demands,” Mr Right handed me a newspaper.

“Sit-ins are in vogue now and the latest call for a ‘sit-in spectacle’ has come from Chaudhry Nisar Ali Khan, the PML-N leader,” I said. “Many others also are expected to join his ‘dharna’ (sit-in) in front of parliament.”“Sit-ins are better than protest marches,” Mr Right observed. “You don’t need CNG to keep your motorcade moving.”“That’s right, but you need a crowd and a proper place to stay on for hours and days,” I said.“That’s no problem,” Mr Right continued, “They can gather a crowd and D-Chowk is now considered an ideal venue for every political circus.”

“The place is now called Democracy Chowk,” I pointed out.“Democracy Circus is inside parliament, the D-Chowk should be named Dealers Chowk, an ideal place for all kinds of deals,” Mr Right retorted.“The Allama was able to snatch a deal to get some election rules implemented, but what the PML-N guys are trying to achieve through their protest ‘dharna’? I asked.“They demand more power for election commission,” Mr Right replied. A great demand indeed in the present circumstances,” he said, “all institutions, including city power houses need more power these days to reduce load-shedding.”

“On the contrary, the country needs the help of election commission to enforce load-shedding in parliaments and cabinets,” I said. “We need power cut in governments, whether federal or provincial. These are creaking under the weight of their cabinets. It’s vital to cut cabinets to size.”“That can be automatically done if capable and honest people are elected to parliaments,” Mr Right said. “It’s a good thing that the majority of leaders, including all Chaudhries, Mians and Khans want to see the election commission powerful enough to weed out undesirable persons from the election process.”

“Don’t you think it is a tall order for the commission to make the election process most fair and flawless in a few months?” I quizzed him.“I think the commission under the new chairman is doing a wonderful job towards this end,” Mr Right said.“Then why some people say that no change is going to take place in the style of governance as the same old faces are expected to be recycled in the coming elections,” I  said.Mr Right grinned. “I don’t think a ballot box contains Ala Din’s Jinn who could produce anything you wish for. Ballot boxes produce results which you have created through your own votes.”

“But the election commission must ensure that only good, reliable and honest people are allowed to contest polls,” I said.“It’s like turning the election commission into a laundry to wash characters of candidates. But every political party has its own interpretation of a good and reliable candidate,” Mr Right argued.“A good candidate only belongs to the party chief’s own family and a reliable one is the one who is sure to win the election, and an honest fellow is the one who shares his ill-gotten wealth with the party. All others are haters of democracy,” he stressed.

“This criterion must change now,” I said. “The people think that candidates, who can not pronounce their names properly, have not paid their electricity and phone bills for years, and don’t know how to pay taxes because they are unaware of their real income, must not be cleared for elections.”“If you ask some other people, they will say that the commission should also prevent liars, cheats, crooks and those, who protect gun-runners, narcotics dealers and smugglers, from entering parliament,” Mr Right said.“That’s true,” I agreed. “The commission should be equipped with lie-detecting machines to interview the candidates.” – KahleejNews