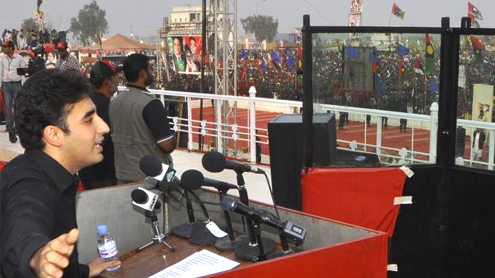 It was a landmark speech for Bilawal Bhutto Zardari, the 24-year-old son of slain Benazir Bhutto and Pakistan’s President Asif Ali Zardari.

It was on-point for his supporters, with deference to his mother and a vision for a more tolerant Pakistan. The location, carefully chosen for its imagery was also telling.Gharhi Khuda Buksh, in the south of Pakistan,  is a mausoleum housing the graves of two former prime ministers of Pakistan who are also Bhutto Zardari’s grandfather and mother. But now that the fuss has died down and the mausoleum returned back to its role as the final resting place of the Bhutto family, what can this young man do to improve the fortunes of nearly 180 million Pakistanis?

To understand politics in this country you have understand the power of a name.In this case, the Bhutto name and the man that shaped the Bhutto Legacy,  Zulfiqar Ali Bhutto. In the 1970s, this charismatic and clever man rose to prominence in the rough and tumble of Pakistani politics with a simple anti-poverty message.His message was one he distilled into a powerful, short sentence: “Roti, kapra aur makan.” Food, clothing and shelter.

For the masses choking under extreme poverty, it went to heart of their daily struggle. Bhutto used it to propel himself into power. He was eventually deposed and then executed by the  military dictator Muhammed Zia Ul Haq. Benazir, Zulifiqar’s daughter, took on her fathers mantle.As a young woman she witnessed her fathers political skills and learned well.  After a tumultuous life, she was murdered at a political rally five years ago. Bhutto Zardari was suddenly the heir to the throne. The Bhutto name struck again as another member of the family was thrust into the spotlight, a spotlight that has further intensified as Bilawal Bhutto Zardari used the fifth anniversary of his mother’s death to announce his own move into mainstream Pakistani politics.

The power of a name

In a country with such high rates of illiteracy, a name can mean the difference between winning an election or losing one.The Bhutto name is a powerful tool. But can Bhutto Zardari navigate the minefield of Pakistani politics armed with only the name?Razu Rumi, a political analyst, said the short term presents challenges.

“Firstly, it’s one of personal security. The threat of terrorism poses a massive security risk for his personal movement. The second, and related challenge, is building and shaping the party. He has to travel to some of the riskiest parts of the country to rally his base and shake hands with the party faithful. That poses an immense challenge because if he cannot do that he simply won’t get the base of his party fully rallied and on his side,” said Rumi.

“This is what his mother did even in exile as she was connected to party officials at all levels. Thirdly, he needs to reshape The Pakistan Peoples Party’s [PPP] relevance. The urban areas of the province of Punjab for example are getting allied with other political parties; he needs to win back that base which was once with the PPP.”

The PPP also suffers from an image problem. Many in today’s Pakistan simply do not know what it stands for. The clarity of Zulfiqar Ali Bhutto’s “Roti, capra aur makan” slogan has been sullied by politics and allegations of corruption. While that may well be par for the political course, Bhutto must understand that in order to stay powerful, the party needs to stay relevant.

Rumi said understanding contemporary Pakistan is the key to survival.”He needs to understand and address the needs of Pakistan’s urban youth. Pakistan is a young country and the concerns of it’s youth can swing an election. beyond the obvious law and order situation the young want jobs, education and work skills, and for economic growth you need the basics like gas and electricity,” he said. Understanding the youth vote is ironic, considering Bhutto Zardari is too young to contest elections slated for spring. The minimum age is 25. He is expected to be the figurehead of his party.

The cult of Bhutto

If politics runs in the genes, then Bhutto Zardari has the right pedigree. But science hasn’t told us that politics is genetic.So it will take all of Bhutto Zardari’s political skills, learned from his mother, to survive and thrive. His name is the key to his success, in part because the party represents the cult of Bhutto.That is Bhutto Zardari’s biggest strength: His name is linked with fortunes of the party and it must be nurtured and respected if the party is to succeed.

But the novice politician needs to play that card for all it’s worth if he wants to change the party, and ultimately Pakistan.When he is under pressure to make decisions in party interest and not what he feels is the good of his nation, he will have to lean on the popularity the Bhutto name. But if you surround yourself in a bubble with advisers and party faithful who have self-interest at heart, then being true to your own ideals will be difficult.

Bhutto Zardari’s first major speech hit all the right notes, but completing the symphony is going to be the challenge.  Has this young man already been played by his father, President Zardari, not for party good, But for Zardari’s own self interest? The question of timing is key here, because Zardari has long been accused of politicising the presidency with his role as co-chair of the PPP.By thrusting his son into the limelight, Zardari has, according to some observers, manged to side step that criticism and allow him the opportunity to contest presidential elections himself.

The PPP is under immense pressure from other political parties, with the standard narrative coming from the country’s media, saying that it has failed Pakistan. Bhutto Zardari’s entry into politics might not be seen as the act of a young man determined to change his country, but as an act of desperate political party looking to ensure its own future.So is Bhutto Zardari a mummy’s boy, his father’s stooge or a future popular leader in his own right? – Aljazeera