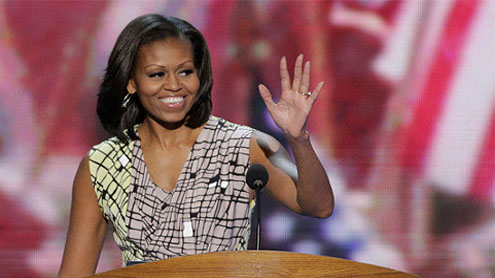 Michelle Obama would rather see herself as a ‘mom-in-chief,’ not a first lady, but she’s a critical part of her husband’s presidency and his close-fought bid for a second term in the White House.

Two-thirds of Americans think favorably of Barack Obama’s partner of 20-plus years, according to Gallup polls, easily outpacing him in terms of popularity in the most prominent unelected position in the United States.‘She’s a very popular first lady,’ said Anita McBride, who served as chief of staff to former first lady Laura Bush and now teaches at American University in Washington.

‘She’s been very effective at using her platform, using her voice, in attempting to make a difference in the issues she’s engaged with,’ McBride told AFP in the run-up to Tuesday’s election.One prime example is Let’s Move, an initiative to combat childhood obesity that she launched soon after moving into the White House — and which dovetails perfectly with the president’s landmark health care reforms.

In a media-savvy act, Obama planted the first White House garden since World War II, growing fresh fruits and vegetables while encouraging an increasingly overweight nation to ease up on junk food.She has also championed the interests of military families, promoted a better work-life balance for women and encouraged arts education, at the same time as raising daughters Malia, 14, and Sasha, 11.‘You know, even when Barack talked about entering politics, I was very hesitant,’ said Obama last Thursday on ‘Jimmy Kimmel Live’ as she worked the pre-election television talk-show circuit.

‘But then I thought about the kind of person that I would want to lead the country, and I felt that to deny him that right would be selfish,’ she added. ‘So we’re in it.’For the Democratic Party, Obama is a prized asset, as witnessed by her pulling power at celebrity-studded fund-raising events and, in August, with her very well received speech to its national convention.Obama was born Michelle LaVaughn Robinson in Chicago on January 17, 1964 to a stay-at-home mom and a father who never missed a day of work at a city water plant despite being handicapped by multiple sclerosis.

She followed her older brother to Princeton University, writing a thesis about black students’ isolation at the elite Ivy League school, before going to study law at Harvard University.Upon graduation, she returned to Chicago, joining the corporate law firm Sidley Austin where, one summer, she started dating a young associate named Barack Obama.The couple married in October 1992, a year before she became an executive director of a Chicago non-profit for young people.

Later she joined the University of Chicago hospital network, rising to the position of vice president of community affairs, then took a leave of absence as her husband’s political career in Washington took off.‘She seems emblematic of a generation of couples, willing to put one career — not necessarily that of the woman — on hold and to work together to advance the career of the other,’ said historian Betty Boyd Caroli, author of ‘First Ladies: From Martha Washington to Michelle Obama.’

Her time as the first African-American first lady has not been without controversy.In 2010, she stirred national outrage when she took her daughters, plus an entire Secret Service detail, on a seaside holiday in Spain just as unemployment in the United States was creeping higher.The year before, she raised eyebrows when, at a Buckingham Palace reception, she affectionately put her arm around the back of Queen Elizabeth II, in what sticklers called a shocking breach of protocol.

But overall, rather than reshape the role of first lady, Obama ‘has used the job much as Laura Bush did,’ said Caroli, staying clear of hot-button issues and from giving the impression she has overt influence over the president.‘Every problem in the world comes to the desk of the American president, but the first lady gets to pick and choose,’ McBride added. ‘They can really make a difference and I think that it extraordinarily empowering for them.

Away from politics, Obama has been a pillar of support for the US fashion industry, wearing a Jason Wu gown for the January 2009 inaugural ball and a Michael Kors sheath dress for her first official White House portrait.‘She looks amazing in our things — and in everybody else’s things, for that matter,’ said African-American designer Tracy Reese after Obama picked out one of her pink sleeveless dresses for her Democratic convention address.The fashion industry loves her back, with Vogue magazine — whose influential editor Anna Wintour is an Obama campaign fund-raiser — putting her on its hallowed cover just two months after she moved into the White House. – Khaleejnews