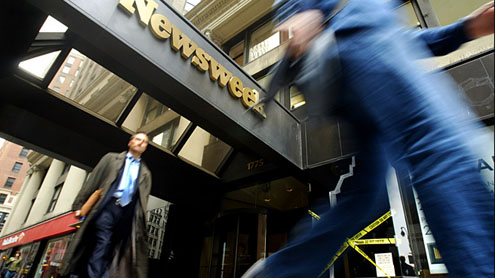 ONE WAY or the other, a magazine needs to stand for something special — otherwise, who cares?

As a once-young journalist I took in this maxim of magazining from the late Clay Felker, who in the seventies pushed New York to the forefront by making the case, week after weekly issue, that New York was one heckuva crazy wonderful impossible necessary place to live.

For decades giant TIME magazine enjoyed a monumental position in the media world precisely because it too, stood for something. It was that the American establishment actually knew what it was doing and one could see that just by admiring the work product: the extraordinary “American Century,” as it was labeled.

People loved it.
But then TIME started to lose it when it stood far too firmly in support of the American establishment on the Vietnam War controversy. Half the country developed doubts and inside of that huge niche Newsweek, with its anti-war reporting, carved out its circulation comfort zone. In the seventies and eighties TIME and Newsweek began aligning one-two as Hertz and Avis.

That dynamic magazine double helix came unzipped when TIME started to look more like Newsweek: less obviously pro-establishment, more consciously hip, trend-following rather than trend-setting, more domestic, less worldly. In losing faith in what it was at its core — as the US establishment newsmagazine — it began to invade Newsweek’s editorial space while at the same time shrinking its own.

The result of the repositioning was disaster for both newsweeklies. Each lost a lot of ground. As TIME eased away from its old space and slithered into Newsweek’s, the number two mag, no matter how hard it tried, had less room to breath.

The current management of Newsweek explained this past week that its decision to soon close the paper edition of the magazine and retreat online was due to severe revenue drops triggered by the destructive impact of the Internet. Hence, the magazine would continue to appear — but digitally only. But the explanation is too pat. In publishing especially, content still matters and sometimes it remains king.

The huge gap in the American newsmagazine market created by TIME’s repositioning and Newsweek’s shrinking has been ably filled by The Economist. The London-based magazine enjoys more circulation in the US than elsewhere, and between 2007 and 2011, while TIME’s print advertising dropped 20 per cent, its rose 20 per cent. So it’s not hard to figure out.

It’s hard to swallow the paper-print-is-dead line, ether. Clearly print is very expensive. But if consumers believe the total product is worth the cost, they will pay the price. Four daily newspapers hit my doorstep here in Los Angeles, and I never bother much about focusing on the price. Because it might discourage me! Their value is immeasurable, even as they are budget-busters.

Print is language whether it is embedded onto paper or it is transformed into figures on the screen of a tablet. I never believed in the tablet revolution as fully as did my newspaper colleague Terry Schwadron in the nineties. The smartest guy I knew at The Los Angeles Times, Terry absolutely predicted newspapers sliding onto tablets.

But when I asked him if that meant the complete termination of dailies on newspaper, he thought and replied: No, not for the very good ones. People will always pay a premium for the best. How else to explain the monthly Le Monde Diplomatique, printed on what seems like the world’s most expensive tissue paper?Why bother reading anything less than the best anyway? The problem with American newspapers and its newsmagazines is as much content deterioration as the digital revolution. It is simpler than some people think. – Khaleejnews

Sticking to the constitution

Sticking to the constitution