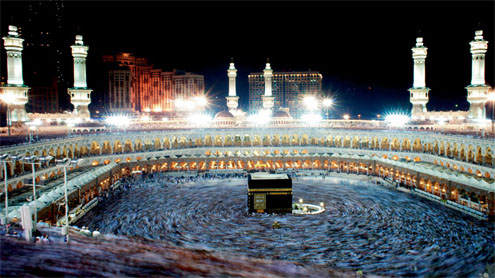 HAJ IS the fifth important pillar of Islam. The literal meaning of Haj is to intend to go on pilgrimage.

In Islamic terminology, it refers to that comprehensive form of worship which involves a Muslim’s visit to holy city of Makkah and performance of certain acts and rituals there and in its surroundings. This form of worship is called Haj because in this a Muslim intends to visit Baitullah, the House of Allah.

The Holy Quran and Sunnah (Tradition of the Prophet Muhammad – peace be upon him) explain in detail the importance, greatness and rationale of Haj. Stressing the importance of Haj, Allah in the Holy Quran says: “The first House (of worship) appointed for men was that at Makkah: full of blessing and of guidance for all kinds of beings; in it are signs manifest; (for example), the Station of Abraham, whoever enters it attains security: pilgrimage thereto is a duty men owe to Allah — those who can afford the journey; but if any deny faith, Allah stands not in need of any of His creatures.” (III:97)

According to a Hadith in Sahib Muslim, the holy prophet said: “O people! Haj has been prescribed on you. So perform Haj.”The annual ritual of Haj reminds us of the great Prophet Abraham, called by Allah as Khaleelullah (Friend of Allah) and about whom Allah says in the Holy Quran: “Abraham was not a Jew nor yet a Christian; but he was an upright man who had surrendered to Allah, (which is Islam), and he was not of idolators.” (III:67)

To understand the true significance of Haj, we must recall Abraham’s life and his sacrifices. He showed us that we must submit to the Will of Allah, no matter what it may cost, and often this submission is a form of test for us that we may prove ourselves in the process of strengthening our faith and character.

From the very beginning, Abraham’s life was separated from others by Allah. He was born in Babylonia (modern-day Iraq) at a time when superstition and evil ruled the world. At the occasion of his birth, his mother had to hide herself and her son in a cave to escape the soldiers of Nimrod, who had ordered the killing of all new-born male children after he had had a certain dream.During his youth, Abraham had great spiritual experiences, which gave an indication of his future life. He was a thinker of unusual intellect. Even in his boyhood, he had begun to question the wisdom of his father, Aazar, who worshipped idols.

Abraham adopted several methods to dissuade his people from superstitious beliefs and evil practices. He taught them that there is a Supreme Being—infinite and transcendent, above and beyond the limited human comprehension, All-Kind, All-Knowing, and nobody is asked for help or mercy save Him.He told the people that that Being is the Creator of this universe, and there is no creator but He, no partner to Him.

He is the only one who is worth worshipping and He is the sole cherisher of humankind. If one follows the simple and logical proofs set out by Prophet Abraham to his people, one comes to the ultimate conclusion that from him spread the eternally vibrant rays of Islam. No wonder Abraham is linked to the Muslims with such a strong bond.

The greatest test of Abraham by Allah was when Allah commanded him in his dream to sacrifice his only and beloved son Ismail. The Holy Quran relates this incident of Abraham’s supreme sacrifice thus: “Then, when (the son) reached (the age of serious) work with him, he said: ‘O my son! I see in vision that I offer you in sacrifice: now see what is your view!’ (The son) said: ‘O my father! Do as you are commanded: you will find me, if Allah so wills, one practising Patience and Constancy!’” (XXXVII”102-103).

Submitting their will to Allah, both of them went to a certain place in the valley of Mina, near Makkah, and there prepared a place for sacrifice. When it was ready Ismail laid himself prostrate on his forehead for sacrifice.Abraham, knife in his hand, stood over his beloved son about to take his life. What courage and faith this father and son had, for this was no easy thing to do for either of them—for Abraham to take the life of his son and for the latter to submit to his father’s wish. Both of them submitted to the Will of Allah.

Just when Abraham’s knife was to descend on to his son’s throat he heard the bleating of a ram and suddenly saw the animal, and a Divine Voice commanded” “O Abraham, You have already fulfilled the vision!” (XXXVII:105).Thus Abraham implemented Allah’s command and succeeded in the trial. Ismail was not to be killed. Abraham withdrew his hand. Allah commanded him to sacrifice the ram in place of Ismail. Then taking the ram, which had miraculously appeared, he obediently made a sacrifice to his Lord.

It is to remind the Haj pilgrims of this great sacrifice that Allah has commanded everyone of them to sacrifice an animal during Haj. The Holy Quran has also pointed out that it is through Prophet Abraham that the ritual of Haj came into being:

“We gave the site, to Abraham, of the (Sacred) House, (saying): ‘Associate not anything (in worship) with Me; and sanctify My House for those who compass it around, or stand up or bow, or prostrate themselves (therein in prayer). And proclaim the Pilgrimage among the people.’ They will come to you on foot and (mounted) on every kind of camel, lean on account of journeys through deep and distant mountain highways.” – Khaleejnews