The Crisis In Syria 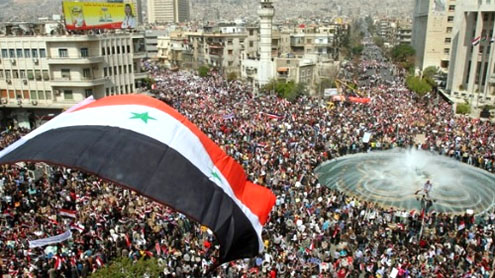 The Crisis In Syria

Protests in Syria started with a call for release of political prisoners, however, as brutal force was used by Syrian army against the protesters, it changed into an organized movement against the present regime.

In the world politics, Syria has emerged as one of the biggest problems as violence against the civilians continues. Emerging from the famous Arab Spring, protests in Syria started in March last year for release of political prisoners. These protests were met by use of power by the Syrian forces, which later turned into complete civil war with Syrian forces using tanks, naval ships and air force against their own civilians. The protests, which started from a demand for release of political prisoners soon turned into a movement for implementation of democratic reforms and free media.

However, Syria’s government under the leadership of Bashar ul Asad considered it nothing more than an unrest by armed anti state elements and conspiracy of foreign powers. As the conflict grew, the protests became more organized and protesters formed a group named Syrian National Council. The opposition group started meeting the foreign countries and called for overthrow of Asad’s government by force. However, unity of the protesters soon vanished as another opposition group called National Coordination Council called for dialogues with the government for implementation of the reforms.

Later, the two groups signed an agreement to unite and launched a movement together. Things got worse when around 15000 soldiers defected from the Syrian army and joined hands with the opposition. The militant group started fighting an organized war against the army and this led to an even greater chaos in Syria. It is unfortunate that despite the efforts from UN and countries like US, France, UK and others, the two forces are still fighting and Syrian government is using extensive force against the civilians.

Although, Kofi Annan, Secretary General of UN proposed a ceasefire, which was agreed by both sides, it could never be implemented due to regular violations by both sides. The whole world has set its sight on the Syria issue as serious violations of human rights have occurred in Syria with more than 10,000 civilians losing their lives in process. Thousands of other protesters need medical attention, which is being denied to them due to heavy fighting and shortages of medicines in the country.

It is important for the world and specially Arab League to play its role in the conflict. It is time  that UN and Arab League make some concrete efforts to end the civil war in Syria instead of making statements and passing resolutions. Syrian government should also show some maturity in handling the issue and should bring the opposition parties on negotiation table.

The last one and a half year of fighting has clearly shown that this issue will not be resolved by use of force. Its time for all the stakeholders to sit down and discuss the reforms that should be implemented. Mr. Asad has already seen what has happened to Hossni Mubarak in Egypt, Moammar Qaddafi in Libya and Zain ul Abideen in Tunisia. Though involvement of foreign hand cannot be ignored in the above examples but still there is a lot Bashar Al Asad can do to save himself from the ordeal other leaders of the region experienced. It’s time that the world witness peace and harmony in Syria and the Arab region. – Waqas Iqbal

‘Barfi!’ is India’s official entry for the Oscars