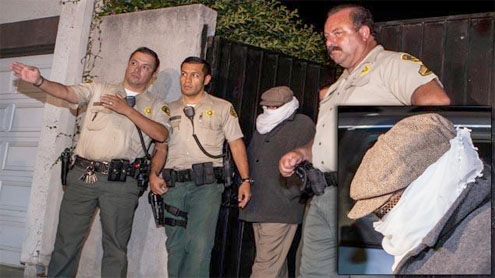 DUARTE, Calif: The shared belief that radical Islam threatens the world brought together an ex-convict, an insurance salesman and a Christian charity in production of a crudely crafted film that ridicules Muslims and the prophet Muhammad and has incited violent protests across the Middle East.

Media for Christ, a non-profit that raised more than $1 million last year “to glow Jesus’ light” to the world, was listed as the production company for the film. Steve Klein, a California insurance salesman and Vietnam War veteran who has spent years protesting at mosques and espousing hatred of radical Muslims, acted as the film’s promoter.And Nakoula Basseley Nakoula, who authorities say has used multiple names and was convicted of bank fraud, says he managed logistics for the film.

Federal authorities have identified Nakoula as the key figure behind the film. A federal law enforcement official told The Associated Press on Thursday that authorities had connected Nakoula to a man using the pseudonym of Sam Bacile who claimed earlier to be writer and director of the film.Most of “Innocence of Muslims” was shot in about two weeks inside a squat warehouse that serves as the offices of Media for Christ, according to Eric Moers, who served as chief electrician for the production.What prompted Media for Christ’s involvement isn’t known because the organizations’ leaders have not spoken publicly. And much about the film remains a mystery, notably who financed it.

Media for Christ, which produces a program called “The Way TV,” reported spending nearly $650,000 on “TV recording production” in 2011. But the organization did not break down those costs so it’s unclear if any of that money was spent on the film.The clumsily produced movie, which looks like a spoof, alternately portrays Muhammad as a fraud, a womanizer and a child molester. Despite its poor production value, the film would have cost at least tens of thousands of dollars to make because of the equipment used and the professional actors and stage hands who were hired.

The permit, issued by Film LA, could have cost under $1,000 though details aren’t known because the document has been sealed at the request of federal law enforcement officials.Moers said the film took 15 to 16 days to shoot and 90 per cent of the work was done at the Media for Christ studios. He said one day was spent at a movie ranch in Santa Clarita, and one day was spent filming at the home of the man he knew as Bacile.Most of the film was shot using a backdrop to simulate other locations. The crew members received sheets with the scenes each day — never a full script — and Moers said there was no mention of the word “Muhammad” throughout the filming. Other actors have come forward to say references to Muhammad were dubbed after the film was shot and they had no idea the film would be so denigrating.

“I’d say this was the most unprofessional professional film I’ve worked on,” said Moers, who estimated the cost of production at $100,000. “I don’t think anyone took it seriously.”He said he was paid with a check issued on the account of Abanob Basseley Nakoula, the 20-year-old son of the purported filmmaker.While Klein has granted a steady stream of interviews and is unapologetic for the film, Nakoula has disappeared since talking to an Associated Press reporter in his driveway Wednesday. And Media for Christ President Joseph N. Abdelmasih has not spoken publicly.

Tax records for the charity do not identify any donors other than Abdelmasih, who lent the organization at least $30,000. He did not return phone messages and an email sent to the charity. Kamal Rizk, listed as vice-president on federal records, did not return several phone messages.Abdelmasih, a Christian originally from Egypt, has spoken out against radical Islam and participated in a protest against a proposal to build a mosque and Islamic cultural centre near the World Trade Center site.The Media for Christ offices are located just off a freeway and next to a mall with big-box stores in the quiet Los Angeles suburb of Duarte. There is no sign on the building identifying the non-profit.

City Manager Darrell George said Media for Christ held a valid business license since 2006 and no issues had ever come up, until authorities confirmed earlier this week that the group was listed on the film permit.One of Klein’s platforms was a weekly show on Media for Christ’s satellite network, the Los Angeles Times reported.Klein has a long history of anti-Muslim activities.

He founded Courageous Christians United, which conducts protests outside abortion clinics, Mormon temples and mosques. He also started Concerned Citizens for the First Amendment, which preaches against Muslims and publishes volumes of anti-Muslim propaganda that Klein distributes. The Southern Poverty Law Center says they have been tracking Klein for several years and have labeled two of the organizations he is affiliated with as hate groups. – Yahoonews