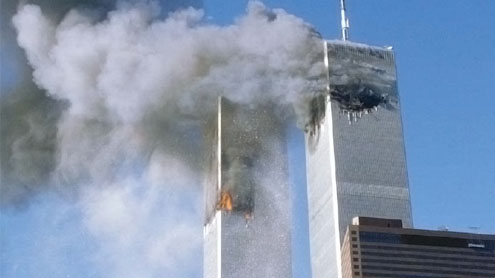 After the 9/11 attacks, US forces attacked Afghanistan to topple Taliban government and eliminate Al-Qaeda.

The backlash of this war was very strongly felt in Pakistan and various terrorist groups joined hands and started a war against Pakistan with suicide attacks on military and civilian establishments. This was the beginning of Pakistan’s war on terror.eptember 11, 2001 was one of those days, which changed the overall dynamics of the power game in the world. With US troops invading Afghanistan in search of Osama Bin Laden and Al-Qaeda, the famous question that was put before Pakistan was “Are you with us or against us?”

Some of the critics believe that the Government of Pakistan, headed by a military general named Pervaiz Musharraf, made a hasty decision in going with the US decision of waging war on Afghanistan. However, most of them hold the opinion that for Pakistan the only choice was to join US in the war against terror as UN had already sanctioned the attack on Afghanistan and it was impossible for Pakistan to stay isolated when if not all, majority of the countries in the world were supporting these attacks. Without going into the debate of whether the decision of Pakistan was right or wrong, was

It actually a war on terror or just an excuse by US to implement their new world order, one thing is for certain that the war on terror changed the lives of 180 million people living in Pakistan. With the US army entering in Afghanistan, Pakistan turned their back on one of their most favored allies in the shape of Taliban, who were ruling Afghanistan at that time. The Taliban, who were once the blue eyed boys of Pakistan’s military establishment and were trained by their very own ISI, took it as a betrayal and hence started carrying out terrorist attacks within Pakistan, which made it to fight one of its own war on terror. All those anti state actors namely Sipah-e-Sahaba, Lashkar-e-Jhangavi, Lashkar-e-Tayyaba and other small sectarian groups, who were not operative in Pakistan anymore, joined hands with Taliban in fight against Pakistan’s military forces. That was the time when people living in Pakistan came to know what suicide bombing is all about.

Indiscriminate attacks were carried out not only against the armed forces but civilians of Pakistan as well thus changing the whole mindset of public. One fact that I still cannot digest is that attacks were also carried out in mosques often resulting in huge number of deaths. Never ever had the people of Pakistan imagined that one day they would not be able to offer their Jumma Prayers in mosques without security. People started getting scared of going to shopping malls, mosques, schools and even parks and cinema halls.

It is surprising to see that with Pakistan being the frontline ally of US in war on terror, it was one of the worst affected country as well as according to the statistics, Pakistan has lost around forty to fifty thousand lives and billions of dollars in this war against terror. Furthermore, the influence of Taliban and other terrorist group is such that they are still controlling major areas in Pakistan-Afghanistan border region. We have also experienced incidents like siege of children library and full fledge fight against the armed forces by our so called religious scholars in Lal Masjid and also the implementation of Sharia in Swat by the Taliban.

We have experienced incidents of beheading of our kidnapped soldiers and destruction of schools in the hand of these Taliban. We have experienced public flogging of girls as Islamic way of giving punishment and suicide attacks at mosques and markets. It is very unfortunate that even after witnessing all this brutality, some of our beloved leaders and scholars do not accept it as our war. They still try to convince us that Taliban are innocent people and its CIA, RAW and MOSAD who are involved in all these terrorist activities.

Now is the time that without wasting our time on deciding whether the decision to support US was right or wrong, we accept this war on terror as our war because yes it was initially not our war but after all the sufferings people of Pakistan have faced in the hands of these terrorist, this has become our war and we have to win it otherwise one day you, me and many like us would be flogged for not having a beard, our women will be flogged for not wearing burqahs and our children will be stopped from going to schools. Before that day comes, we should accept it as our war on terror. – Waqas Iqbal