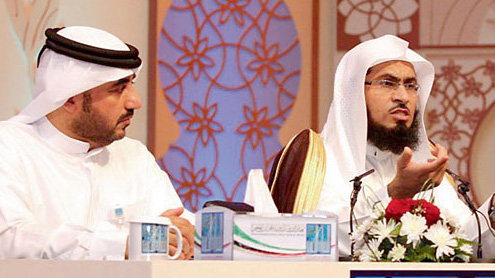 Listening carefully to the Holy Quran, mulling over its verses, and sincerely implementing its teachings is the key solution to all problems of the mankind.

This was stated by scholar Dr Shaikh Essam Al Uwaied in his lecture titled, How to Taste Quran’s Sweetness, as part of the 19-lecture programme of the 16th session of the Dubai International Holy Quran Award, on Tuesday night at the Dubai Chamber of Commerce and Industry.  The Saudi preacher asked: “Why would a person recite the Quran for one hour, yet the heart remained untouched, closed and chained?”  “The person, for sure, does not taste the real sweetness of the Quran, and its light has not so far penetrated the heart.

The people do need to properly deal with the Quran,” he said in reply to his question. Proposing a golden rule to taste the sweetness of the Quran, Dr Uwaied said: “We need not only to understand but also to feel that Allah Almighty is talking to us. We have to be persistent and keep reciting the Quran until its verses remove the layer that blocks Allah’s light from entering the heart.  Also, we need to live the Quran by observing its orders and avoiding its prohibitions.”  As affirmed in the Quran, Chapter 10/Verse 57, Allah Almighty said the Quran has been revealed to Prophet Mohammed (PBUH) for healing and purifying people’s hearts, guide them, and be mercy for them.

“The Quran is not only for recitation; it is rather for implementation to ensure mankind’s happiness in life and the hereafter,” he said, and narrated the story of a man who was upset after losing Dh700,000 in a deal, but his life changed for better after properly reciting the Quran. Warning of a depressed life and blindness on the Day of Resurrection to whoever turns away from Allah’s teachings, Dr Uwaied urged all Muslims to create a close relationship with the Quran.

On Wednesday night, Dr Khalid Al Musleh gave a lecture on, ‘The people of the Quran’. On Thursday, Dr Sabri Al Demerdash is to deliver a speech titled, ‘Words only said by a Creator’.-khaleejtimes