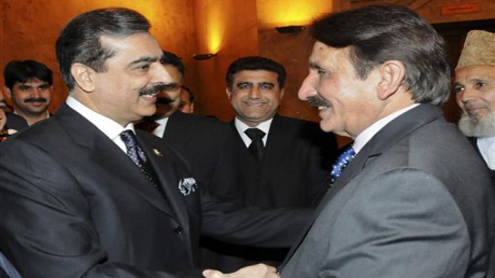 ISLAMABAD: To his admirers, Chief Justice of Pakistan Iftikhar Chaudhry is a hero whose relentless pursuit of a money-laundering case against the president is teaching a generation of the country’s leaders a long-overdue lesson in respect for the law.

To his critics, he is a runaway judge in the grip of a messiah complex whose turbo-charged brand of activism threatens to upend the power balance underpinning precarious embrace of democracy. Last week, Justice Chaudhry made his boldest move yet by disqualifying prime minister Yousaf Raza Gilani as punishment for his repeated refusal to obey court orders to re-activate a corruption case against President Asif Ali Zardari. Gilani’s downfall marked a watershed in a long-running showdown between the judiciary and the government that has laid bare the institutional tensions plaguing a country that has test-fired ballistic nuclear missiles, but has yet to agree on how it should be run.

“In practical terms, democracy is finished because the balance of power between parliament, the executive and the judiciary has been ruined,” said a senior member of Zardari’s ruling Pakistan People’s Party (PPP). The military, which has ruled Pakistan for about half of its 65 years as an independent nation, has also not hidden its disdain of Zardari’s government, but has made it clear it does not wish to seize power. And it has its own problems with Justice Chaudhry’s activism. The drama has been spiced by allegations of bribe-taking brought against Chaudhry’s son by a billionaire property developer, who has himself been accused of land-grabbing and fraud.

The controversy briefly put the stern-faced judge on the defensive before he regained the initiative by disqualifying Gilani. The next chapter in the saga could start as early as Wednesday, when the Supreme Court holds its latest hearing in more than two years of legal wrangling aimed at forcing the government to re-open proceedings against Zardari. The country’s political class is now transfixed by the question of whether Chaudhry will opt to pause in the wake of his victory over Gilani, or press home his advantage by demanding that Raja Pervez Ashraf, the new prime minister, re-activate the case. Zardari, a consummate political survivor, has already sacrificed Gilani in his determination to ensure the money-laundering case, which falls under Swiss jurisdiction and dates back the 1990s, remains closed.

While many Pakistanis are happy to see his unpopular government on the ropes, the pugnacious chief justice is facing a growing backlash from those who fear his courtroom victories are being bought at the price of Pakistan’s stability. “We all have a problem with corruption, we all want these guys taken to task,” said Mehreen Zahra-Malik, a columnist with a local English daily. “But I don’t think it should be at the expense of the entire house falling apart.” Opposition parties have exploited the crisis to pile pressure on Zardari, raising the risk that the government might be forced to call general elections before its term expires in March. Whatever the president may decide, the stage is set for a new bout of institutional gridlock at a time when Pakistan needs agile leadership to face a host of challenges, from a chronic power crisis to militancy and tense relations with Washington.

Appointed in 2005, Justice Chaudhry became embroiled in a confrontation with Pervez Musharraf, then Pakistan’s military leader, who removed him from office after he opposed plans to extend the general’s term in office. Huge crowds poured onto the streets to support Justice Chaudhry’s stand against the generals. Zardari’s government, which took power in 2008, was forced to re-instate him the following year after an outpouring of street protests by lawyers. The heady victory seems to have shaped the judge’s self-image as a champion sent to right the wrongs inflicted on ordinary Pakistanis by a self-serving elite and an over-privileged military.

He has since used his powers to investigate everything from petrol and sugar prices to cases of people whose relatives say they have been abducted by intelligence services. The judge’s eagerness to rewrite the rules of Pakistan’s power game have won him support among those who see the judiciary as the only realistic hope of holding their leaders to account. Zardari’s choice of Ashraf as prime minister may only reinforce Pakistanis’ sense of despair in their government. As a former power minister, many people hold Ashraf partly responsible for the chronic electricity shortages that triggered a fresh bout of violent protests last week. But the CJP, too, has got his fair share of criticism. Some say the decision to disqualify Gilani smacks of a grudge match cheered on by his allies in Pakistan’s boisterous media.

Legal experts have questioned whether Justice Chaudhry may have exceeded his powers by ousting the prime minister, arguing that there were other options available to resolve the stand-off with Zardari’s government. “It’s my impression that the judgements are highly politicised,” said Asma Jahangir, a respected human rights lawyer. “The populist approach of the chief justice will destabilise the democratic process.” The ruling PPP believes Justice Chaudhry is deliberately fast-tracking corruption proceedings against its members, while leaving cases against opposition politicians to gather dust. The media frenzy triggered by Gilani’s ouster also eclipsed a sub-plot that had, days earlier, put Justice Chaudhry in the spotlight over allegations that his son had accepted huge bribes from Malik Riaz, a business magnate.

Malik Riaz said he had given almost $3.6 million in bribes to Arsalan Iftikhar, the chief justice’s son. Iftikhar has denied any wrongdoing. The growing backlash against the CJP in some parts of the political sphere may temper his next move. While Zardari’s government is widely tarnished with allegations of cronyism and incompetence, it also stands at a unique juncture in Pakistan’s evolution from an army-dominated to a civilian-led system. Before he was ousted, Gilani had been on course to become the first prime minister to lead a democratically elected civilian government to the completion of a five-year term. The government has often sought to deflect criticism of its record by portraying itself as a “martyr” to a conspiracy by its opponents in the judiciary and military.

That narrative gained more credence in the eyes of many last week when an anti-narcotics court run by the military issued an arrest warrant for Makhdoom Shahabuddin, a former health minister, who had been Zardari’s first pick to replace Gilani.  Should Justice Chaudhry attempt to disqualify Ashraf, the prime minister, if he also refuses to re-open the graft case against Zardari, then the unease over his no-holds-barred activism is only likely to grow.“The Supreme Court will be under tremendous pressure not to send two prime ministers home,” said Babar Sattar, a legal commentator. reuters -Dailytimes