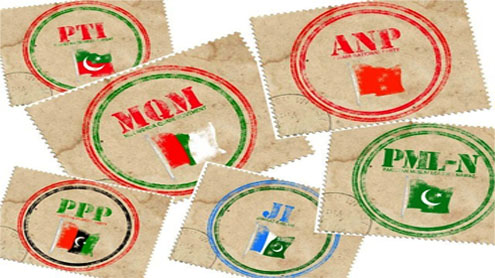 Intolerance in political arena of Pakistan has been there for long time, however, during the recent years, it has achieved new heights with the introduction of media and social media websites.

People’s intolerance towards contrasting political opinions has increased violence in the society.It was hot afternoon of May, a group of workers belonging to a nearby factory were sitting at a roadside dhaba for their lunch. The lunch was ignored though as the group was more interested in discussing the recent political situation of the country after the Supreme Court verdict against the PM. Two of them were of the opinion that the court has committed a mistake by convicting the PM and Bhuttos have once again being victimized. However, the rest said what we are hearing these days in media alleging the government of corruption and malpractices. Within no time, the debate turned into a heated argument and soon the two pro PPP men were lying on the floor beaten up by the rest.

The very next day, I was sitting in an office of a large corporate, where a discussion on the same topic was going on between the CFO and a couple of his friends. Once again discussion turned into a series of allegations on each other and ultimately the not so gentlemen left hurling abuses on each other. For those who watch political talk shows on our media from 8 to 12 everyday, this is not something strange. Anchors of these shows, instead of conducting or managing the show, use that platform to give their own opinion and the guests, who are normally ministers, senators and members of the parliament of Pakistan make sure that they all speak at one time using filthy language not only against their colleagues but their families as well. Move one level up and the show of intolerance in the assemblies for the last many years is one of the distinct features of Pakistan’s political history.

Intolerance towards political and ideological differences has been on show all over the world, however, Pakistan, being a country of passionate and ridiculously emotional people, has taken it to a level where it has become a menace for the society. From our leaders to common men, no one is ready to listen to the other side’s point of view and in recent years, people have been called traitors, Indian and American agents and in some cases even killed just because they had an opinion different from others. Coming back to intolerance in Pakistan politics, even after 64 years, we have still not learnt to respect the political opinions of others. Social media websites have also played a major role in spreading this intolerance in political arena of Pakistan.

Ask any anchor person or journalist regularly tweeting, what pro-PTI people are doing to them on twitter whenever they criticize any political decision of Imran Khan. Same goes for the PPP and PML-N supporters. It is unfortunate to see how the youth of our country has developed intolerance against anyone who does not agree with their opinion. The power of reasoning and healthy debate has been overcome by the use of abusive language and intolerance towards contrasting opinions. Politics has become a game where politicians and their supporters are relying more on their physical power rather than political reasoning and argument.

It is a dangerous trend as political intolerance leads to chaos in the society. In case of Pakistan, it becomes even more dangerous as our history has been full of incidents where failure of politicians and political system has been made a reason by khakis to take over the country and rule it for longer durations. It is very important for the political leadership and media to discourage intolerance among the masses and promote healthy argument with solid reasoning rather than abusive language or character assassination of their opponents. – Waqas Iqbal