by ToP
in Opinion
3 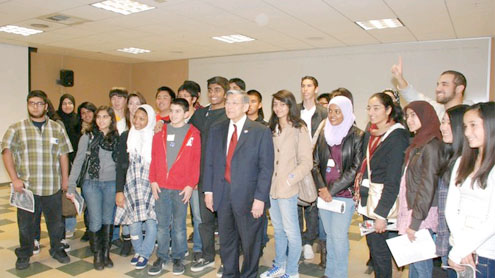 In a 2009 report by Gallup entitled Muslim Americans: A National Portrait, surveyors found that only 51 per cent of Muslim American youth (ages 18 to 29) were registered to vote – the lowest percentage recorded amongst young Americans.

With the 2012 elections approaching in November, Muslim Americans are aiming for a higher percentage of registered voters and accordingly a higher turnout at the polls.Imams and Muslim community activists across the United States are encouraging young Muslims to play their part in addressing and remedying the ills they see in their communities. Their calls are rooted in a verse from the Holy Quran which states, “Truly, God does not change the condition of a people until they change what is in themselves” (13:11). Understanding this call to action through their faith, Muslim Americans can work towards becoming effective agents of change and a recognisable voting bloc for this defining year.

Muslim institutions, including mosques and civic groups, have kick-started the drive to mobilise the Muslim community by producing informational material on candidates and planning election forums where voters can meet to ask questions about candidates and learn about their respective platforms on issues like foreign policy. The Council on American Islamic Relations (CAIR), a national civil rights organisation, has produced a document called the “2012 Presidential Voter Guide” as part of its “Muslims Vote” campaign. This guide lists biographical information on candidates as well as their positions on issues like the economy, healthcare, national security, foreign policy and civil rights.

While Muslim civic engagement has always been encouraged, this election year proves to be significant in the struggle for the civil rights and liberties of Muslim Americans. Specifically, a pressing struggle has been addressing the rise of Islamophobia this year. This fear has manifested itself in anti-Muslim statements from candidates that show a prejudice and lack of concern for hard-working Muslim American citizens and their well-being. Muslim Americans believe they have to continue educating elected officials and decision-makers in order to challenge prejudices and replace false ideas of Islam and Muslims with accurate ones.

The Muslim Public Affairs Council (MPAC), a national public policy organisation established in 1988, is currently running the “I Am Change” civic leadership programme, a three-hour workshop that promotes civic engagement by teaching people how to effectively talk to public officials about domestic and foreign policy issues.

This programme is part of a critical strategy to counter the idea of Muslims as a source of fear. Rather, it shows a commitment to the civic process and the nation. Youth groups, including different chapters of the nationwide Muslim Students Association (MSA), are scheduling these workshops on their campuses throughout the United States. Similarly, organisations like the New York City-based National Network for Arab American Communities encourage civic engagement by providing access to human services and support for national service projects to member organisations.

Muslim Americans are not focused only on increasing voting, but also modelling citizenship in other ways, including volunteering. At Georgetown University in Washington, DC, for instance, the MSA is encouraging civic engagement by volunteering with Habitat for Humanity, a Christian organisation, to build a house for a family in West Virginia.

In answering the call to service, these Muslim students of Georgetown hope to set an example of model Muslim citizenship and build relationships with other volunteers as they build a home together for a family in need. This project will also have an interfaith aspect to it; each day will begin with an interfaith prayer.

With all these preparations underway, the example of young people leading the way in Muslim American civic engagement – from voter drives to volunteer activities – will hopefully continue to increase and make a strong impact in all aspects of civic society. This way, our political leaders can represent the interests of a truly diverse United States of America.