by ToP
in Opinion
2 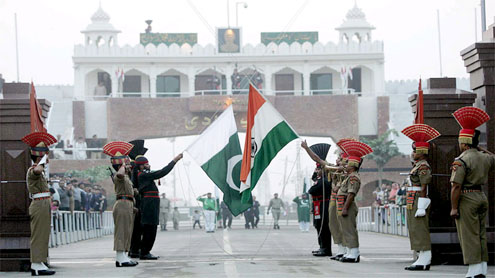 As around 200 Pakistanis crossed into India from Wagah border on foot on December 28, 2011, under the not-so-suspicious eyes of the Pakistani and Indian border force, it was a moment of realisation.

I was among them. These were men and women from across the country who to this day nurse and boast the capacity to believe in the peace process between the two countries.Our destination was Allahabad, the venue for the moot on – ‘Global hegemonism and challenges to democratic rights’ – under the Pakistan India Peoples’ Forum for Peace and Democracy.The relationship between India and Pakistan has deteriorated since the last many years, hence the need for this convention gathered momentum. It is now being felt more than ever before by the people of the two countries to rescue and restore India-Pakistan relations and revive the soft relationship that prevailed almost a decade ago.

The past seven years have seen the Mumbai terror attacks and a continuing assault on Pakistani sovereignty by NATO forces, not to mention the attack on Salalah check post killing 24 Pakistan troops on the Pak-Afghan border. The Convention pledged to reinforce democracy, ensure socio-economic justice and defend the security as well as the right to life and livelihood of the peoples of the two countries.All these are under threat from the policies of the global hegemony and its accomplices in our two states who are currently wielding the levers of power. The Delhi Declaration of the 2005 Joint Convention had decided to “appoint a joint committee to deliberate the question of establishing peace and goodwill between the peoples (as distinct from the elite) of India and Pakistan on a permanent basis.

The committee had to suggest how the peoples of India and Pakistan should jointly and separately mobilise themselves to bring about the conditions of permanent peace, participatory democracy and united struggle against neo-imperialist forces. It was expected of the committee to formulate a long-term plan of action for the Forum to realise its objectives.This has not happened. The last two decades have seen a paradigm shift in the development models of India and Pakistan, where both governments have adopted neoliberal policies. An integral part of these economic policies has been the abdication of the state’s responsibilities towards their citizens.

Instead, the states have become captive to a form of crony capitalism, where public and natural resources are massively appropriated for private profit.It was felt that these policies have exacerbated poverty and inequality and a vast majority of our people live far below the poverty line, while small elite has enriched itself.The “war on terror” and these economic policies have fanned the flames of religious fundamentalism. The explosive combination of religion with politics has added to the volatility of the region and threatens minorities in both countries. Women, children and marginalised sections bear the brunt of these intolerant extremist tendencies.

Our societies have failed to address the deep-rooted structures of patriarchy. Discrimination against women pervades our social life. It wasn’t surprising the participants were quite vocal about the problem of Kashmir and that it must be resolved in accordance with the wishes of the people on both sides of the Line of Control.Also, the issue of denuclearisation and demilitarisation in the region has assumed considerable significance in recent times.

This convention demanded denuclearisation of South Asia, as part of the struggle for global nuclear disarmament. It also called for the reversal of the arms race, which is consuming massive resources to the detriment of the peoples of the two countries. Ironically, both the Pakistani and the Indian militaries have often opposed peace-initiatives.

Other issues of the subcontinent are: common threats to India and Pakistan — internal and external; global capitalist hegemony and peoples’ struggles; human security; and Kashmir.The most disturbing fact is that hostility and suspicion continue to haunt the two peoples. The need of the hour is to resist global hegemonism, which threatens peace and democracy, and to support peoples’ resistance movements in all parts of the world in a spirit of international solidarity.At the same time, the need to evolve new strategies, launch initiatives to facilitate people-to-people dialogue and hold regular joint conventions without interruption or undue delay, are indispensable issues. – Khaleejnews