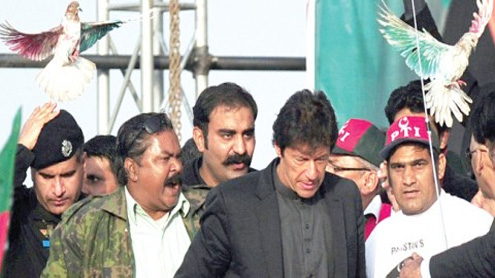 Imran Khan has been written off before. As a cricketer, he was initially dismissed as having average ability before captaining his team to World Cup glory. For the past 15 years his political party has stumbled from one election humiliation to the next.

Now though, he is convinced his time has come. Riding a tsunami of popular support ahead of elections widely expected next year, he is bracing himself for a campaign of dirty tricks. “During a match there comes a time when you know you have the opposition on the mat. It is exactly the feeling now, that I have all the opposition by their balls,” he said, in an interview last month with The Daily Telegraph as he travelled to the north-western city of Peshawar for yet another rally on his 59th birthday. “Whatever they do now will backfire.”

Further evidence of Mr Khan’s steepling ascent was on display in Karachi, Pakistan’s biggest city, today on Christmas Day, when at least 100,000 people turned out to hear his message that change was sweeping the country. The figure is all the more remarkable as the city is far from Mr Khan’s stronghold of Lahore. “I’ve never seen a gathering like this in Karachi in two decades,” said a local journalist covering the rally.

Everything changed in October, when he attracted more than 100,000 supporters to a parade ground in Lahore. The world took notice of a new star in Pakistan’s political firmament, dominated for decades by a handful of the richest families. A YouGov-Cambridge poll released on Fri Dec 23 found that Khan is the most popular political figure in Pakistan by far, with some 81 per cent of respondents choosing him as the person they think best suited to lead the country. Two thirds meanwhile said they would vote for his PTI party. Even that rally was almost sabotaged. At the last minute his venue was moved from a modestly sized park to the Minar-e-Pakistan, capable of holding hundreds of thousands of people.
If the switch by city authorities loyal to Nawaz Sharif, the main opposition leader, was an attempt to make Mr Khan’s rally appear insignificant it failed badly. Mr Khan expects more of the same. His Lahore headquarters were recently sealed off amid allegations taxes had not been paid. In 2008, a photograph of a fake £40m cheque apparently from James Goldsmith, billionaire father of Khan’s ex-wife Jemima, surfaced.

“They will throw everything at me,” he said. “Last time around, when they panicked, they called Jemima part of a Jewish lobby. She’s Christian, her mother’s Christian, her father was Christian, but because the grandfather was Jewish it became part of a Jewish plot to take over Pakistan.” Inevitably scrutiny will fall on Mr Khan’s private life. As one of Pakistan’s most famous bachelors he had been expecting Mr Sharif’s party to spread malicious rumours – until an American journalist published a book detailing how the opposition leader had offered her an iPhone and asked her to be his “special friend”. “He can’t really do that now because he knows it will just come back to haunt him,” said Mr Khan roaring with laughter in the front seat of a supporter’s car. “Now they are going after me on tax, but that will look even worse.”

Corruption has been Mr Khan’s defining message since setting up his Tehreek–e–Insaf (the Movement for Justice) in 1995. Such is the public perception of his integrity that he has raised millions of pounds for a cancer hospital and university, and his flood relief fund dwarfed similar efforts by Yousuf Raza Gilani, Pakistan’s prime minister, which were hampered by corruption fears. That makes him a dangerous candidate for established forces such as President Asif Ali Zardari, the widower of Benazir Bhutto, as a new generation tires of political dynasties known for making themselves rich at the expense of the country. – Pakistantoday