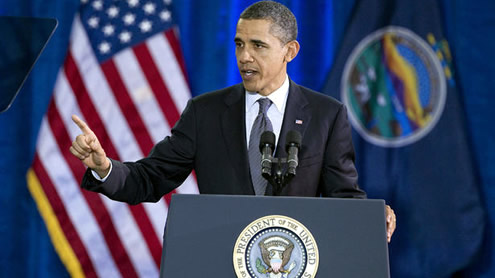 With his speech in Kansas, President Barack Obama has begun a national conversation about the economy and the role of government.

In presenting his view, Obama shifted the economic conversation from deficits to the crucial issue of growth. After all, deficits matter because they could have a harmful effect on growth. The question we should ask is: What would make this economy grow? One theory heard a lot these days is that the economy is burdened by excessive government regulation, interference and taxes. All these pressures on business, especially small business, are keeping the economy down. Cut them, the Republican candidates all say, and the economy will be unleashed. It’s a compelling picture, but the data simply do not support it.

A World Economic Forum survey that ranks countries on their overall economic competitiveness puts the United States fifth; the countries ahead of it, including Singapore and Finland, are tiny, with populations around five per cent that of the United States. The World Bank’s report “Doing Business” ranks the US No. 4 again behind a handful of tiny countries. As is the case with the World Economic Forum, that ranking has not changed much over the years. The Kauffman Foundation, which looks at the level of US entrepreneurship, found that in 2010, 340 out of every 100,000 Americans started a business each month. That rate hasn’t changed much in the past few years; it is only slightly higher than in 2007, before the recession. Regarding regulations, Bloomberg News has crunched the numbers and found that the Obama administration has not reviewed or issued significantly more rules than its predecessors.

The Organisation for Economic Cooperation and Development (OECD) released a study last week measuring tax revenue as a percentage of gross domestic product. The United States came in 27th out of 30 countries. Taxes are low in historical terms as well, the lowest since the early 1950s. But the complexity of the US tax code clearly exacts a price in terms of economic growth and competitiveness. The World Bank study finds that the only category in which the United States is not in the top 20 is “paying taxes,” where it ranks a miserable 72. (The US ranking has shifted from 76 in the 2008 report to 46 in 2009 to 61 in 2010.) Tax reform that gets rid of the loopholes, deductions and credits — and the inherent corruption related to them — would clearly help the economy.

So, outside of the tax code, the United States does not seem to have slipped very much in terms of competitiveness and ease of doing business. What has changed? The answer is pretty clear. Only five years ago, American infrastructure used to be ranked in the top 10 by the World Economic Forum. Now we’re 24th. US air infrastructure has gone from 12th to 31st, roads from eighth to 20th.

The drop in human capital is greater. The United States used to have the world’s largest percentage of college graduates. We’re now No. 14, according to the most recent OECD data, and American students routinely rank toward the bottom of the developed world. The situation in science education is more drastic. In other words, the big shift in the United States over the past two decades is not a rise in regulations and taxation but a decline in investment — in physical and human capital. And investment is the crucial locomotive of long-term growth. Michael Spence, the Nobel Prize-winning economist, points out that the United States got out of the Great Depression because of the spending associated with World War II but also because during the war, it dramatically reduced its consumption and expanded investments. People spent less, saved more and bought war bonds. That surge in investment — by people and government — produced a generation of growth after the war. If we want the next generation of growth, we need a similarly serious strategy of investment. – Khaleejtimes

Talks the only solution

Talks the only solution