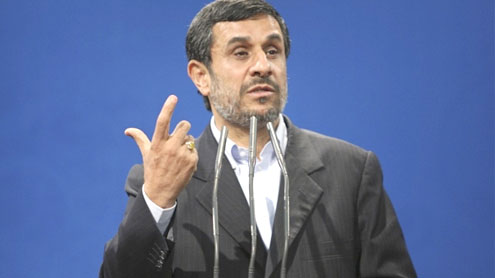 TEHRAN: For months, Iran’s clerical establishment and Revolutionary Guard Corps commanders have been trying to curb the powers of President Mahmoud Ahmadinejad. In recent weeks, the president has fought back, using combative speeches and threats to reveal his opponents’ corruption in order to hold on to his job.

The tactics appear to be working, according to parliament members and analysts.Once thought to be a political has-been, Ahmadinejad has defied expectations, and opponents say they do not believe he will step aside early or quietly serve out a term that ends in 2013. Instead, they say, he seems determined to try to exert power well beyond that point, by placing close associates in key positions. He has already begun aggressively mobilizing political forces across the country and is preparing for key parliamentary elections scheduled for March 2.

“We have all underestimated Ahmadinejad,” said an opposition politician, a supporter of the now-silenced Green Movement who insisted on anonymity because he, like dozens of others, was told to return to prison to serve outstanding sentences. “Ahmadinejad has returned like a phoenix rising from the ashes.”After a falling out in the spring with the country’s supreme leader, Ayatollah Ali Khamenei, Ahmadinejad’s position had appeared untenable. Although the two men have not publicly acknowledged the spat, a number of Shiite clerics and Revolutionary Guard commanders who had been Ahmadinejad supporters have launched a series of relentless attacks against the president and made clear that their loyalties lie with Khamenei.

Even before the public dispute began, tensions between Ahmadinejad and Khamenei had been brewing for more than a year. Ahmadinejad’s government had refused to enforce what hard-line clerics consider the proper etiquette for women wearing the veil, promoted Iran’s pre-Islamic history and flirted with talks with the United States — all of which defied the supreme leader or his allies.Ahmadinejad’s opponents now accuse the president and his close advisers of being a “deviant current” plotting to take power from the Shiite clerics who have led Iran since the 1979 Islamic revolution.

But Ahmadinejad has struck back with equal ferocity. Allegations of corruption against senior leaders of Iran’s system were long considered taboo but have now become a recurring theme of the president’s speeches. Such allegations are popular with ordinary Iranians, many of whom have long accused top clerics of accumulating wealth through their influential positions.This month Ahmadinejad spoke to about 500 campaign officials in one of Tehran’s most prestigious political venues, a witness said. In his speech, he warned of an unavoidable confrontation between him and his opponents, who he said “go on vacation for three months with filled wallets.”

He accused his opponents of being poor people “who turned into billionaires” through corruption. The speech was supposed to be off the record but was published in part by the Web site dolatema.com, which supports Ahmadinejad’s government but is blocked in Iran, a sign of the increasing pressures on the president.“The people’s pain and dissatisfaction is because of those who claim to support the supreme leader,” he said.About the same time as the speech, documents were leaked to the press linking a key Ahmadinejad opponent in parliament to a major embezzlement case. Meanwhile, the president won a key vote in parliament that he had been widely expected to lose.

After the vote, one lawmaker, Ali Motahari, handed in his resignation, which was not accepted by other members of parliament. He summed up Ahmadinejad’s grip on Iran’s leaders in the Tehran Emrouz newspaper: “A person has some documents and is bold, and we should all do as he wishes until his term ends,” he said.Analysts say the president’s increasingly aggressive rhetoric is forcing the clerical and security establishment to make a decision on Ahmadinejad’s political future.“It is clear there will be no compromise possible with Ahmadinejad,” said Abbas Abdi, a political analyst who opposes the government’s policies and some decisions by Iran’s clerical leaders. “If anybody wants to put him aside, it will come at great political costs.”  – WP