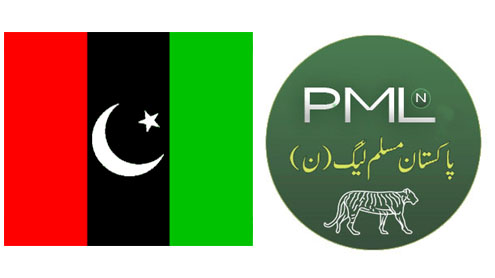 PPP and PML-N are the two major political parties in Pakistan who are always in state of denial and always accusing each other.

These parties should think about the national interest instead of carrying out this ridiculous rage between the two parties.PPP and PML-N being the two major political parties do not leave any occasion to win over or to insult each other. May it be their leaders or party members, both are always in a constant battle to win.

A competition between the two parties is always there but it should not be to an extent where national interest is left behind. Elections are around the corner and PML-N is trying their best to win the points by benefiting from the current governments weak points. Instead what they should be doing is fight against the dengue fever. There is a lot that the PML-N government can do within its resources for the general public.

The general public does not care what one politician said to another, what they want to know is whether they will get food, shelter, jobs, electricity and water. The public is interested what benefits they will get from any of the two parties. They are least bothered how both the parties are bringing down each other making havoc. The kind of accusations both the parties claim against each other worsens the image of Pakistan. This is what we are showing to the world that this is what we are and this is how we respect each other.

Both the parties should carry out their own campaigns but most importantly they should be taking care of their responsibilities first. The PML-N has a lot to take care of in terms of Dengue. Whereas the PPP government has a lot more to do in terms of load shedding. Not only load shedding but also keeping the national interest in mind and pondering over the current situation in Karachi, they have to stop the endless killings turning our economic hub into a battleground. The solution is not to win the solution is to think about the people first and solve their issues.  – Sayina Bashir