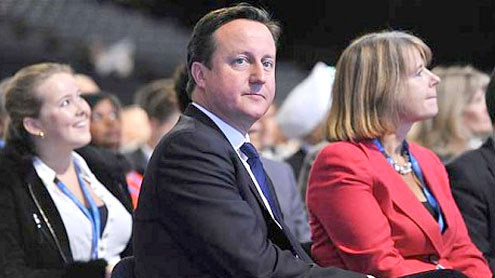 Ah, the end of another blood-spattered week in the bearpit, or rather, deceptively deep-and-murky Fox hole of politics.

David Cameron is no doubt looking forward to lighting a fire in the hearth (possibly with handfuls of quantitatively eased tenners), firmly drawing the Downing Street curtains on the monstrous regiment who have been deliberately misconstruing his attempts to toady up to the female electorate, and instead snuggling up with Samantha to watch a movie.

We know from photographs taken at the time of Michelle Obama’s visit in May – and pored over as if they were the Rosetta Stone – that the Prime Minister has a smart mustard sofa and an extensive DVD collection, including boxed sets of the undeniably gripping 24 and the incontrovertibly manly Band of Brothers.

But if I might make a suggestion, Dave, ditch the machismo, pop along to Blockbuster and rent the one film that could possibly save your electoral skin: What Women Want. Because it’s becoming painfully obvious that you sure as hell don’t know.The film, starring Mel Gibson, is a comedy romp based on the premise of an arrogant alpha male skilled at seducing leggy lovelies who one day has a freak accident that enables him to hear women’s thoughts. And here’s the thing: they aren’t thinking what he thinks they’re thinking. Imagine that!

They aren’t as stupid as he assumes, or as gullible. They may not say so out loud, but they are astute enough to recognise when they are being fobbed off, deceived and peddled meaningless platitudes. Oh, and they – we – can nurse a grudge for longer than any chap could ever imagine. All the way to the next election, perhaps?False flattery may garner headlines but you aren’t fooling anyone as you clamber on and off random “female” bandwagons, one day flying the flag for interracial adoption, the next against forced marriages, the next again speaking out against the disgraceful anomaly of primogeniture.

I think I speak for most women in Britain when I say that we don’t, as a rule, lie awake at night worrying about who’s going to inherit daddy’s 19th-century pile – that, Dave, would be Lady Mary from Downton Abbey.What does make a 21st-century woman’s heart beat faster in the silent watches is the knowledge that she has two children to get to school (packed lunch, gym kit, swimming gear, money for the Charity Smoothie Sale) and one to fob off on the cripplingly expensive nursery even though he’s obviously not well and they are bound to call, but hopefully it won’t be before the 11am presentation.

Or before the lunchtime dash to collect her father’s medication and call Social Services to see if they ever do intend to organise a home help. Oh, and the soaring utility bills and – how much did you say for the weekly grocery shop? It’s one thing to forgo luxuries, a bit trickier to cut back on bread or vegetables.

Money is tighter than a fiscal tourniquet, the spectre of unemployment is looming at every professional’s door – but cheer up ladies, some of you will only have to wait 18 months for your pension instead of two years! I mean, how great is that?Did this Government really think we’d be out cheering them on the streets, burning our pinnies and throwing our mob caps in the air for such a pathetic piece of mealy-mouthing? Words elude me. Apart from the rude ones.The elephant in the room – the angry rogue she-elephant threatening to go on the rampage and trample the Coalition to death come polling day – is the issue of tax breaks on childcare and tax breaks for families. There now, I’ve said it, Dave.

I’ll keep it simple. We all feel broke and some of us genuinely are broke, just from trying to lead decent, productive lives and contribute to society. Not a Big Society, though, because we never did grasp what it meant; sorry about that. Here in the real world, where we’re just a credit card bill away from crisis, we just want to bring up and educate our children properly and care for our parents and we understand that we have to work, even though some of us would prefer not to.What we don’t understand is why it’s so grindingly tough to make ends meet, even on what ought to be a reasonable income, and so difficult to achieve what is laughingly called the work-life balance.

Perhaps our Deputy Prime Minister Nick Clegg “kills himself” to do the school run. A great many of us would lose our jobs if we sloped off during the working day and frankly being home in time to cook his children’s supper or give them a bath doesn’t make him a national hero, it makes him a jammy so-and-so. And, yes, I’ve anonymously e-mailed his boss.Tory support among women has slumped to 29 per cent compared with 38 per cent among men. Could it be linked to the average £2,000 drop in a typical family’s income, or the fact that while the world faces financial Armageddon, our Government has earnestly promised us more female Members of Parliament?

The bitter irony is that, initially, women were drawn to the idea of a coalition. Our instinct for collaboration and consensus gave us to believe that common sense and a sense of fairness would prevail. Yes, the double act of bumptious Dave and hapless Nick smacked rather of Eric and Ernie, and George Osborne had the flaccid pallor of a politician reared in a (gilded) veal crate, but hope springs eternal. Until, that is, the goodwill dries up.Both Cameron and Clegg have played on their family-man credentials, but their privileged families, however blameless in themselves, bear absolutely no resemblance to the frantic credit-crunched juggling act that takes place between 6.30am and bedtime in homes across the country.

Money – tax breaks – can’t buy happiness, but it does confer choice, a choice about whether both parents work full time, a choice about who cares for bed-bound relatives, who cares for the baby.Ask any high-flying female executive How She Does It and she will cite the other people in her life who cement all the disparate elements together behind the fairy-tale façade of Having-It-All effortlessness. Fairy-tale façades don’t come cheap, however, and for every woman who makes it to the dizzy heights of a Gucci briefcase and daily blowdry there are a great many potential high fliers whose wings were clipped early in their career by a dispiriting lack of choice.

Women don’t expect something for nothing, but getting something for something seems entirely equitable. Far too many of us spend the bulk of our taxed salary on paying someone else to look after our children, who then pays tax on their salary. At the grave risk of sounding like an idiot savant, I’ll state the blindingly obvious: that’s not fair.According to the latest figures from the Office for National Statistics, 66.5 per cent of mothers work, as do 67.3 per cent of women “without dependants”, i.e. children – apparently, caring for elderly and infirm family members doesn’t count.

As a workforce – any force – we should not, must not, be taken for granted. The Conservatives will win or lose the election on the votes of women, but to make any headway, they need radically to alter their masculine mindset. Cameron’s recent jejune apology for dissing women and the whole Calm Down Dear debacle are nothing more than a distraction, a tiresome and irrelevant sideshow.In truth, we women are a practical lot. We want substantive changes in taxation that will impact on our daily lives.

The cuts in working tax credits and child tax credits, the withdrawal of child benefit and sweeping redundancies in the public sector affect us most and hit us harder.Working out what we want – and how to give it to us – isn’t brain surgery, Dave. It’s all about What Women Want, stupid. And while it’s a universal given that we love chocolate, nothing sticks in our throat like political fudge. – Telegraph