Slimmed down Mariah Carey accused of lip-synching during BET Awards 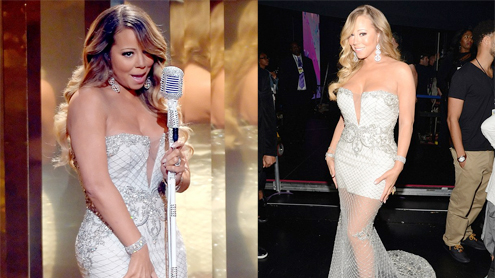 Slimmed down Mariah Carey accused of lip-synching during BET Awards

She was accused on Twitter for lip-syncing during a performance on American Idol earlier this year in May.

And now Mariah Carey has been blasted for the same offense at the 2013 BET Awards in Los Angeles on Sunday night.The 43-year-old songstress took to the stage to perform her new song Beautiful alongside singer Miguel and rapper Young Jeezy.And her pitch perfect performance immediately drew criticism on the social networking site.beachsax11 said: ‘Jeezy so shady. Talkin bout RIP to mariah Carey vocals. Died in the 90s. All that lip synching. I’m so disappointed.’

ITZME_MYIAH added: ‘OHHH so i wasnt bugging… Mariah Carey is horrible at lip syncing lol’And Mariah Facini wrote: ‘I don’t even understand why Mariah Carey even came to the BET awards. she lip synced the entire time.’At one point during the performance it even appeared that Mariah continued to move her lips when there was a pause in the vocals. Despite the controversial performance, Mariah did have stage presence, showing off her newly slimmed down figure in a plunging white strapless dress with a clingy embellished sheer overlay.The mother-of-two paired the ensemble with sky high heels and was dripping in diamonds.

Just last month, critics on Twitter blasted Mariah’s performance on American Idol with claims she lip synched her medley of hits.But a representative for the singer insisted her concert on the finale was live.Following the controversy, a video analysis gave credence to that claim. A Hollywood music producer and audio engineer who studied Mariah’s performance for Radar Online said it was a ‘tough call’, but rumours the track was dubbed could have been down to a bad video edit.

‘At around 2:15 to 2:21 in the clip she appears to be out of sync with the audio. That’s the one spot I think could be the giveaway that she’s lip syncing,’ said the producer at the time, who requested not to be identified.’However, sometimes a slight delay in the audio sync to the video can also make someone look like they are lip syncing when they are not. It could just be a bad edit,’ he said.The reaction on Twitter was quick and harsh after Mariah sang her greatest hits medley, which included Hero, My All, Vision of Love, Make It Happen, We Belong Together and her new single Beautiful.

‘Hahaaa Mariah Carey’s Idol Finale Performance Could Be The Worst Lip Syncing Of All Time,’ wrote FS Big Bob, while Joey O’Hern tweeted: ‘Mariah, you look great…but your lip-synching was off. Good try though!’The music insider said Mariah’s medley was so complex that she would have to be really good at lip synching to pull it off.’It’s hard for me to to be sure one way or another with this one,’ the source said. – DailyMail

3 killed in clashes as Egypt erupts with protests