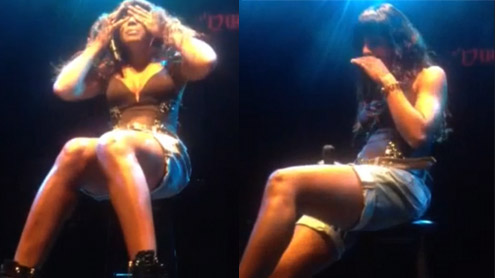 Kelly Rowland had to take a tearful time-out on Sunday during her performance of her confessional ballad Dirty Laundry which references her professional jealousy of former bandmate Beyonce.

The 32-year-old singer was performing her new single at the Fillmore Silver Spring in Washington, D.C. when she was overcome with emotion.In her Dirty Laundry song, the former member of Destiny’s Child references the runaway success enjoyed by Beyonce since the trio split up to pursue solo careers.Kelly was well into the song when she was overcome with emotion as she delivered the lyrics, ”Turnin’ me against my sister,’ in reference to Beyonce, according to Us Magazine.

Kelly had been sitting on the stage wearing denim shorts, a black bustier and black boots performing the heartfelt song.She was swaying gently back and forth while singing the raw track when the moment overtook her.One particular lyric in the tune, which also contains very colourful language, illustrated her ambivalent feelings toward Beyonce.Kelly sings: ‘When my sister was on stage killin’ it like a (expletive)/ I was enraged, feelin’ it like a (expletive)/ Bird in a cage/ You would never know what I was dealin’ with/ Went our separate ways but I was happy she was killin’ it/.

‘Bittersweet she was up, I was down/ No lie, I feel good for her but what do I do now? … Post-Survivor, she on fire/ Who wanna hear my (expletive)?’The ballad also appears to reveal that Kelly was once in an abusive relationship.Kelly lost her composure during her performance and sat hunched over onstage with her hair hiding her face.She later pulled her head back and wiped tears away with both hands.

The crowd started chanting her name in support and Kelly wiped away a final tear and resumed singing after a roughly 20-second time-out.’Doing this song for me was so therapeutic. Honesty, like my mama always says, is always the best policy,’ she told the audience before performing the song, according to Us.Kelly earlier this month joined Paula Rubio as a new judge on The X Factor USA, with the duo replacing L.A. Reid and Britney Spears.Kelly will be on her Lights Out Tour until June 28 and her fourth album  is scheduled for release June 18. – DailyMail