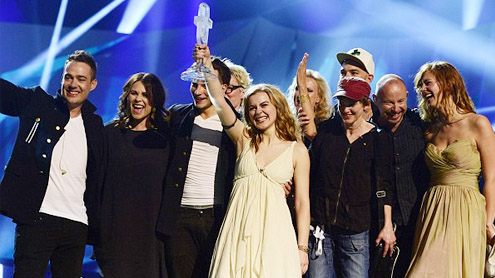 Danish singer Emmelie de Forest has won this year’s Eurovision Song Contest with her song Only Teardrops.The blonde, who sang in English, was crowned this year’s winner following the lengthy spectacle in Malmo, Sweden.

The UK’s entry Bonnie Tyler ended up in a disappointing 19th place after failing to win enough votes from the participating countries.Bizarrely, the host officially declared Denmark was the winner before returning to Cyprus and Croatia to take their votes. However, the winner was clear, with Denmark being 47 points ahead of second place, Azerbaijan’s Farid Mammadov.

In third place was Ukraine’s Zlata Ognevich with Gravity.As always, politics and neighborliness proved to be a dominating factor for many of the votes.Welsh singer Bonnie, who scored huge hits in the 1980s with Total Eclipse Of The Heart and Holding Out For A Hero, was the 15th act to perform on the night, which saw 26 acts take to the stage.Although she didn’t received many points, she did received a rapturous reception from the audience following her performance of Believe In Me.

The 61-year-old star belted out the track in a black off-the-shoulder dress, and managed a quick ‘thank you’ following her set.Bonnie’s placing comes after veteran singer Engelbert Humperdinck finished second last for the UK at last year’s ceremony. UK’s neighbour, Ireland’s Ryan Dolan was the last of the 26 acts to perform with dance song Only Love Survives.

One of the entries making waves on social networking site was Finland’s Krista Siegfrids’ Marry Me.In a bid to make a statement about her country’s ban on gay marriage, Krista shared a kiss with a blonde female at the climax of her song.Romania entry Cezar put on quite a flamboyant performance of his track It’s My Life.Wearing a bizarre, black outfit, he sang in an incredibly high falsetto while dancers moved around him dressed in nude underwear. – DailyMail