Rihanna proves worth waiting for in thigh high white boots 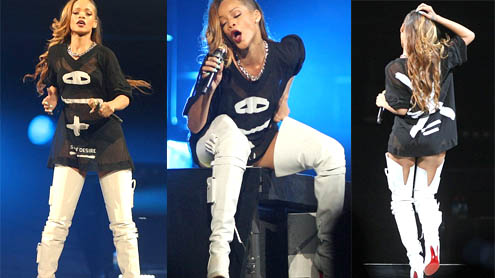 Rihanna proves worth waiting for in thigh high white boots

It’s not just Rihanna’s latest album which is Unapologetic.The singer proved the same as she took to the stage 70 minutes late for her Diamonds world tour in Montreal on Sunday night.

Luckily for her patient fans she proved worth waiting for, showing her figure in a pair of thigh high white boots.She teamed the boots with a transparent T-shirt dress baring the legend ‘sea of desire’ and black underwear.The outfit proved just one of six equally outrageous outfits.They included a pop art inspired two-piece, in clinging red and yellow PVC, and studded black leather underwear, which she wore with another pair of over-the-knee boots.Rihanna wore her hair curled, flowing and long, with half her head shaved.

Earlier her fans had been left waiting as she took her time coming on stage.’Feel free to come out, I think it’s your show tonight, tweeted one, with a picture of the packed stadium.The delayed start to the gig came after Rihanna was forced to cancel two shows of her Diamonds world tour on doctor’s orders after suffering a bout of laryngitis.But she seemed fully recovered as she belted out her set in Canada.

One of the more tender moments came as she dedicated the song Diamonds to her late grandmother Dolly, whose birthday it was.Throughout the day her grandmother had been in her thoughts, with Rihanna tweeting a series of tributes to the woman she affectionately called Gran Gran Dolly.’It’s all about you sunshine, and all because of you! happy birthday dolly I miss you soooo much right now,’ wrote Rihanna.She shared a series of pictures of Dolly, including of her final birthday last year before her death in July.’I would never forget this day,’ she wrote. ‘I could understand every word she wanted to say. – DailyMail