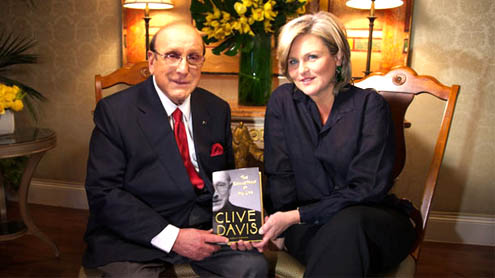 His musical enthusiasms are legendary – as is his break-neck schedule – and those so-called “golden ears.”

Not only did he discover talent as wide-ranging as Janis Joplin, Santana, Whitney Houston and Alicia Keys, he has recorded everyone from Bob Dylan and Bruce Springsteen to Dionne Warwick and Aretha Franklin. There were the Grateful Dead and Aerosmith. Did I mention, Barry Manilow, Jennifer Hudson and Kelly Clarkson? He formed a company with L.A. Reid and Babyface, which became home base for Usher and Pink. With Sean “Puffy” Combs he founded Bad Boy Records and recorded Notorious B.I.G. The list does go on and on.

Nearly 50 years after the one-time lawyer became the president of CBS Records, he remains a vital force in the music industry. Davis, now 80, reigns as the chief creative officer of Sony Music Entertainment and just last week he appeared on the cover of Billboard Magazine’s power issue. Now comes his autobiography, “The Sound Track of My Life,” in which he chronicles a childhood in Brooklyn, the loss of his parents when he was still a teen and his triumphant, scholarship-supported march through New York University and then Harvard Law School.

The over 500-page book is filled with the often juicy behind-the-scenes stories of some of the best known artists of our time: How Janice Joplin suggested she perform a sexual act with him to seal their deal, how John Lennon offered him insight to the creative process, the false accusations of embezzlement that ended his career at CBS.

And there are deeply personal revelations: The end of his two marriages, and in the final chapter, Davis discusses his sexuality. He is bisexual, he told me. Since the end of his second marriage in 1985, he has been sexually involved with men. At first with both men and women, Davis said, but for the past 20 years with two male partners: A doctor for 13 years and for the past seven, with another man he does not name.He tells me bisexuality is “maligned and misunderstood” but that it is his truth and he decided it was time for him to say so publicly. I asked Davis about the old adage that people are “either gay, straight or lying.””I’m not lying,” Davis said. “[Bisexuality] does exist. For over 50 years I never had sex with a male. It wasn’t repressed. I had very good sexual relationships with women.” When pressed about why he doesn’t name the men he has had relationships with, he said it is their privacy he is protecting, not his own.

We have followed Davis around for much of the past month – trying to keep up. From his extraordinary office at the top of New York’s Sony Building, to his stunning, art-filled New York duplex and finally to his bungalow at the Beverly Hills Hotel, Davis is fun to be around. Something is always happening. New young composers want to meet with him, senior citizen superstars need his ear. He is always unruffled. Has time for everyone. The necktie and handkerchief always match.And music, there is always more music. – YahooNews