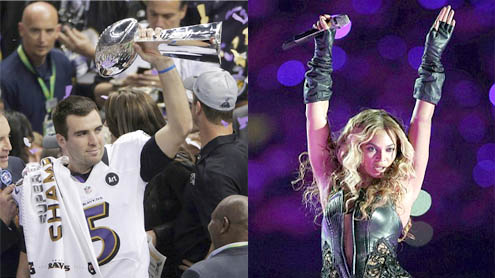 The Baltimore Ravens swooped to Super Bowl victory over the San Francisco 49ers in New Orleans this evening after one of the closest and most exciting final match-ups in years.

An eventful night began with an emotional rendition of ‘America the Beautiful’ sung by children of Sandy Hook Elementary, heard a soaring national anthem from Alicia Keys, a powerhouse half-time reunion and performance from Beyonce and Destiny’s Child and an embarrassing 35-minute power cut.And at the end of a riveting football game inside the Superdome, the Ravens managed to best a resurgent San Francisco team 34-31, after the Ravens survived a spirited second-half comeback from their illustrious opponents led by inspired quarterback Colin Kaepernick.At the beginning of the third quarter a power outage at the Super Bowl put the nation’s biggest sporting event on hold for more than a half-hour Sunday, interrupting an otherwise electric, back-and-forth game that ended with Joe Flacco and the Baltimore Ravens as NFL champions thanks to a 34-31 victory over the San Francisco 49ers.

Flacco, voted the MVP, threw three first-half touchdown passes to cap an 11-TD, zero-interception postseason and Jacoby Jones returned the second-half kickoff 108 yards, a Super Bowl record, to give Baltimore a 28-6 lead.Moments later, lights lining the indoor arena faded, making it difficult to see. When action resumed, Colin Kaepernick and the 49ers scored 17 consecutive points, getting as close as 31-29.But Baltimore stopped San Francisco on fourth-and-goal from the 5 with under 2 minutes left when Kaepernick’s pass sailed beyond Michael Crabtree in the end zone.With the Ravens leading 28-6 at the beginning of the third quarter, a blowout appeared on the cards.

But play was delayed for 35 minutes as half of the Mercedes-Benz Superdome was plunged into darkness.The surreal spectacle was due to the failure of an outside power source, but the 49ers were sparked into action after a lethargic first half.In a remarkable four minutes and 10 seconds, Colin Kaepernick was inspired, helping the 49ers post 17 points, but the aging Ravens defense staged one final hurrah to give Ray Lewis the perfect retirement present.Dubbed the ‘Harbowl’, or the ‘Brobowl’ by American media, for the first time in Super Bowl history two brothers went head-to-head as head coaches.

And it was elder brother John Harbaugh who claimed the NFL’s biggest prize in his fifth season as Ravens coach, with victory over Jim’s 49ers.This was the 10th time New Orleans hosted the big game — tying Miami for most in a city — and first since Hurricane Katrina devastated the Big Easy in August 2005.During the half-time show Beyonce channeled her Sasha Fierce alter-ego on stage at the half-time Super Bowl show this evening as a surprise reunion of Destiny’s Child wowed the crowd in New Orleans.

Launching her set with a strong performance of ‘Crazy in Love’ complete with a guitar flaming as it played out its solo, Beyonce proved her doubters wrong by singing live one week after the controversy over her lip-synching at the Presidential Inauguration.And in a massive surprise for the estimated 100 million watching at home, Beyonce was joined by Destiny’s Child members Kelly Rowland and Michelle Williams who sang with the diva on their massive hit ‘Bootylicious’ and her single smash ‘Single Ladies’

However, despite Beyonce appearing to sing live, Twitter was filled with complaints from viewers at home who complained about the sound quality – some said that they were unable to hear Rowland and Williams as they joined their more illustrious bandmate on stage.Beyonce sang like she had something to prove at the Super Bowl, balancing out the testosterone levels on the football field with a dance-heavy performance that featured her Destiny’s Child band mates and an all-female band.She emerged onstage singing some of ‘Love on Top,’ transitioning to her hit ‘Crazy In Love’ in an all-black ensemble, which matched the dark stage. She ripped off part of her shirt and skirt as she danced hard with background dancers doing the same.

She sang live — and sounded good. Days after admitting to singing to a pre-recorded track at President Barack Obama’s inauguration, she proved herself to any doubters and added a few off-script remarks as if to show her microphone was on.She set a serious tone as she emerged onstage in all black, singing lines from her R&B hit ‘Love on Top.’The stage was dark as fire and lights burst from the sides. Then she went into her hit ‘Crazy In Love,’ bringing some feminine spirit to the Super Dome as she and her background dancers did the singer’s signature booty-shaking dance.

Beyonce ripped off part of her shirt and skirt. She even blew a kiss. She was ready to rock, and she did so like a pro.Her confidence — and voice — grew as she worked the stage with and without her Destiny’s Child band mates during her 13-minute set, which comes days after she admitted she sang to a pre-recorded track at President Barack Obama’s inauguration less than two weeks ago.Beyonce proved not only that she can sing, but that she can also entertain on a stage as big as the Super Bowl’s.She was far better than Madonna, who sang to a backing track last year, and miles ahead of the Black Eyed Peas’ disastrous set in 2011.

Beyonce was best when she finished her set with “Halo.” She asked the crowd to put their hands toward her as she sang the slow groove on bended knee — and that’s when she the performance hit its high note.’Thank you for this moment,’ she told the crowd. ‘God bless y’all.’Her background singers helped out as Beyonce danced around the stage throughout most of the 13-minute performance. She was especially top-notch during ‘End of Time’ and ‘Baby Boy.’She had a swarm of background dancers and band members spread throughout the stage, along with videotaped images of herself dancing. And the crowd got bigger when she was joined by her Destiny’s Child band mates.

Kelly Rowland and Michelle Williams popped up from below the stage to sing ‘Bootylicious.’ They were in similar outfits, singing and dancing closely as they harmonized. But Rowland and Williams were barely heard when the group sang ‘Independent Woman,’ as their voices faded into the background.They also joined in for some of ‘Single Ladies (Put a Ring On It),’ where Beyonce’s voice grew stronger.She asked the crowd to put their hands toward her she belted the slow groove ‘Halo’ on bended knee — and that’s when she the performance hit its high note.And in a bizarre and embarrassing turn of events for the NFL And the New Orleans Superdome, just after Beyonce finished her performance and the third quarter had begun the lights went out in half the stadium.

After a few minutes, the public address announcer said the Superdome was experiencing an interruption of electrical service and encouraged fans to stay in their seats.Some fans did the wave to pass the time. Players milled around on the sidelines, some took a seat on the bench, other on the field. A few of the Ravens threw footballs around.Play resumed after a 35-minutes and the delay, which TV reports attributed to an outside power feed that died, started when the overhead lights first went out on the 49ers’ side of the field before dimming in other parts.

During the delay, players could be seen stretching along the sidelines, quarterbacks were throwing balls and cheerleaders were going through routines.Children from Sandy Hook Elementary School and Jennifer Hudson sang an emotional rendition of ‘America the Beautiful’ as the pre-game show at the Super Bowl came to a conclusion.The Grammy and Oscar-winning singer was joined by 26 children from the tragic school in Newtown, Connecticut where 20 first-graders and six adults died in a mass shooting on December 14th.Bringing tears to the eyes of the players of the Baltimore Ravens and the San Francisco 49ers, the spine-tingling collaboration was followed by Alicia Keys who played out the national anthem on the pitch from behind a white piano.

Wearing white shirts that seemed to embody the innocence of youth, with green ribbons pinned on the right side of their shirts, the 26 children stood on the NFL’s red, white and blue shield-shape logo and many smiled excitedly as they sang the first verse before a silent yet packed Superdome crowd.Then Hudson, wearing a black blouse and long, white skirt, fronted them for a second verse that showcased her sterling voice.Baltimore Ravens coach John Harbaugh watched alongside his daughter, Alison.Fans offered a rousing ovation at the finish, and the chorus then trotted to the 20-yard line and turned, with their hands on their hearts, to watch Alicia Keys sing the national anthem.

Alicia Keys performed a lounge-y, piano-tinged – and live – version of the national anthem ahead of the Super Bowl on Sunday.The Grammy-winning singer played the piano as she sang ‘The Star Spangled Banner’ with her eyes shut.Crowds spent the afternoon filtering into the Superdome in New Orleans as the biggest game in all of football is due prepared to kick off.The Big Easy was transformed into one massive party on Sunday as the city prepared to host the 47th Super Bowl between the San Francisco 49ers and Baltimore Ravens.The city’s French Quarter was packed with visiting fans soaking up the atmosphere before the biggest game in American professional sports was due to start at 6:30 ET. – DailyMail