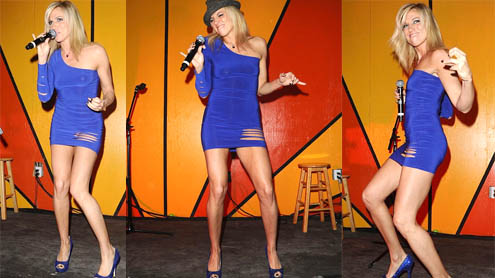 She’s undeniably fabulous for a forty-something.But given her sexy outfit, it seems like Debbie Gibson is trying to recapture her once-Electric Youth.

The former Eighties pop star almost got away with her bright blue (a very 80s hue) bodycon but the slashes on the skirt and arm were far too young for somewhere her age; slashes and rips belong on the clothes of a teenager and nowhere else. The 42-year-old was playing at a Throwback Thursday party held for Sveda vodka at Pink Taco in Hollywood.

Debbie has made a slight comeback via reality shows over the past few years.In 2003 she was a judge on the short-lived American Idol spin-off, American Juniors. She was also a contestant on Fox’s Skating with Celebrities in 2006. She was voted out in the third episode.And last year she starred on Donald Trump’s hit NBC reality series, The Appentice.

On the fourth task, she won $50,000 for her charity, Children International.Gibson was fired on April 4, 2012 in the seventh task because she had brought in the least amount of money between her teammates in the boardroom, Dayana Mendoza and Teresa Giudice.The party also saw the reunion of Blossom stars, Mayim Bialik and Joey Lawrence, who were massive in the early ’90s thanks to the teen favourite. – DailyMail