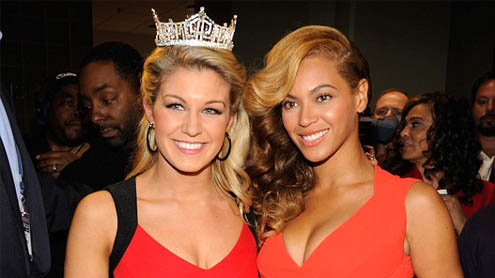 She answered critics of her Inauguration Day performance on Thursday with a sterling live performance of the National Anthem – and looked stunning while doing it.

And if critics were still in doubt of Beyonce Knowles’ ability to enrapture fans with emotional performances and trend-setting looks, they were in for a treat after the Super Bowl press junket.The singer slipped into a figure-fitting orange dress after the event, where she posed with Miss America Mallory Hagen.Ms Hagen matched her in a red and black cocktail dress in a similar cut as the ladies gave interviews at the Crescent City’s Ernest N. Morial Convention Center.

The 31-year-old entertainer kept her hair swept in curls around her right shoulder, and her make-up natural for the junket.Her tangerine cocktail dress plunged at the neck and hugged her curves perfectly to the knee-length hem.Beyonce paired the number with a perforated gold mirrored leather pump from Jimmy Choo.The five-inch metal heels elongated her legs and added an extra punch to her colourful choice of wardrobe change.Together the women lit up the room as they flashed wide smiles for cameras and greeted a flurry of waiting reporters.Also joining Beyonce was her supporting mother, Tina, who was styled in a chic red blazer, black straight-leg trousers and matching peep-toe pumps.

Her famous daughter later sat down with former NFL player Deion Sanders to discuss her forthcoming performance for Sunday’s Super Bowl half-time show.Their sit-down came shortly after Beyonce discussed why she decided to sing to a prerecorded track at President Barack Obama’s Inauguration Day cereomy on January 21.Calling herself a self-proclaimed ‘perfectionist,’ she said wanted the day to go off without a hitch and did not have time to practise with the orchestra before the event because of her commitment to rehearsing for the Super Bowl.

‘I practice until my feet bleed and I did not have time to rehearse with the orchestra,’ she said, adding that she was also emotional that day. ‘Due to no proper sound check, I did not feel comfortable taking a risk.’It was about the president and the inauguration, and I wanted to make him and my country proud, so I decided to sing along with my pre-recorded track, which is very common in the music industry. And I’m very proud of my performance.’It was the superstar’s first public comments on what has become known as ‘Beyonce-gate.’

Her rendition of the anthem at the inauguration was critically praised, but it came under scrutiny less than a day later when a representative from the U.S. Marine Band said Beyonce wasn’t singing live and the band’s accompanying performance was taped. Shortly after, the group backed off its initial statement and said no one could tell if she was singing live or not.With the controversy growing each day, and everyone from politicians to other entertainers weighing in, the inauguration performance threatened to overshadow her planned half-time show.

Addressing the issue as soon as she took to the podium Thursday afternoon, she asked everyone to stand, and, with an image of the American flag behind her, performed a live rendition of the national anthem that mirrored the one on Inauguration Day. After, she said with a laugh: ‘Any questions?Despite her performance, there were.When pressed about whether any sound was coming from her voice when she sang for the president, she said she was singing along to the track and not mimicking. And when asked if she would be singing live at the Super Bowl, she said: ‘I will absolutely be singing live.

‘This is what I was born to do.’She added later: ‘I always sing live. … The inauguration was unfortunately a time where I could not rehearse with the orchestra, actually because I was rehearsing for the Super Bowl. So that was always the plan.’Beyonce also got a chance to talk more in detail about the reason why she was in New Orleans – to perform at the halftime show. Calling it one of her career aspirations, she said when she arrived at the Superdome, she was so moved by the experience she took her shoes of and ran on the field, taking in the history at the famed venue.It really makes me emotional,’ she said. ‘When I am no longer here, it’s what they’re gonna show.’

Beyonce has teased photos and video of herself preparing for the show, which will perhaps be the biggest audience of her career. Last year, Madonna’s halftime performance was the most-watched Super Bowl halftime performance ever, with an average of 114 million viewers. It garnered more viewers than the game itself, which was the most-watched U.S. TV event in history.

But she would not give anything more away about the performance. While a Destiny’s Child reunion was shot down by Michelle Williams, who is starring in a production of ‘Fela!’, the third Destiny’s Child member, Kelly Rowland, is in town. Beyonce laughed off questions of whether Rowland or Beyonce’s husband, Jay-Z, would join her on stage. – DailyMail