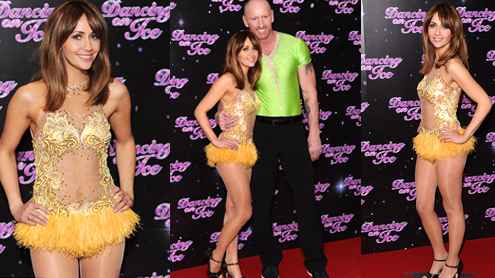 Over the last few weeks Coronation Street actress Samia Ghadie has been seen make-up free and in her tracksuit following vigorous training sessions.

But on Thursday the actress turned heads at the launch of Dancing On Ice, looking stunning in a tiny leotard which showed off her fantastic figure.The image is unlikely to go down well with Jennifer Metcalfe, after her boyfriend Sylvain Longchambon reportedly left her as he ‘developed feelings’ for his dance partner.The 30-year-old star showcased her petite figure in the see-through leotard with gold brocade, which revealed her toned flat stomach.The cute outfit featured a tiny yellow-gold skirt, meaning her long slim legs were completely bare minus a pair of flesh-coloured tights.

She further elongated her pins with a pair of open-toe black heels.Pretty Samia wore her fringe in a centre partying while her hair fell to her shoulders.The star looked confident as she posed on the red carpet and didn’t seem affected by the drama surrounding her partner’s love-life. It’s been reported that Slyvain has developed feelings for Samia during training, although Samia has denied anything is going on between the pair. Slyvain’s ex-girlfriend Hollyoaks star Jennifer Metcalfe doesn’t seem so sure though and is reportedly planning on confronting Samia at an upcoming TV awards show.

According to The Sun she told friends she would ‘pull no punches’ when it comes to dealing with the issue, after she was dumped by her former dance partner.It’s thought Samia will pull out of the National Television Awards in order to avoid unnecessary confrontation, however if both of them are up for awards it’s likely they will still both attend. Meanwhile Rugby League player Matt Gardner has left the Corrie star devastated after he tweeted abuse at her.As well as calling her an unprintable word, he wrote: ‘Maybe your New Year’s resolution should be not stealing other people’s boyfriends.’Samia, who has been hiding out with her mum, is concerned about how the drama will affect her popularity with the public. – DailyMail