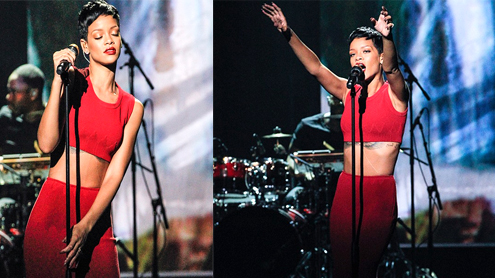 She’d jetted around from Germany to England to France in a matter of days, but Rihanna showed no sign of fatigue as she took to the stage in Paris on Wednesday.

The 24-year-old looked chic and seductive as she performed for the TV show La Chanson De L’Annee 2012.She put her toned and tattooed torso on show in a midriff baring crop top and matching long tube skirt.She had earlier arrived wearing a dramatic red fur coat.

The star is on a relentless schedule in Europe promoting her new album Unapologetic.But she has still found time to spend with her on-again love Chris Brown, who is still on supervised probation for assaulting Rihanna in 2009.She recently joined him on his Carpe Diem tour in Europe and the pair regularly post intimate snapshots of each other on Twitter.The singer dumped Karrueche Tran in September to concentrate on his friendship with Rihanna and reportedly gave her a generous payout following their split. – Dailymail