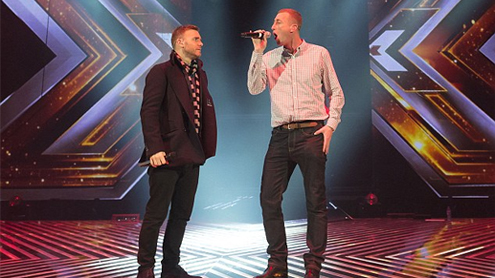 He’s gearing up for the biggest performance of his life as the X Factor comes to an end this weekend.

However, despite practising for his duet alongside Gary Barlow, it’s thought Christopher Maloney is seriously fearing for his voice.According to reports the Liverpudlian wore a sign saying ‘on voice rest’ on Thursday and was unable to get through an entire song.The former cruise ship singer was photographed rehearsing with his mentor Gary Barlow on stage.Gary was seen offering him comfort throughout their practise, putting his arm around him.

The pictures also show Christopher surrounded by a number of dancers, suggesting we can expect an upbeat number from him, Even though he looked happy and confident, speaking to the Mirror on Thursday, he revealed:’As soon as this rehearsal is over I won’t speak. I won’t sing the high bit either I just want to conserve my energy for the show.’This is something I do, I get that many people trying to talk to me.

‘I want to keep it all and try to give it out in the competition. ‘I was rehearsing all day on Thursday so now I need to keep it rested.’It’s thought that while the other contestants and members of the crew mingled, he sat alone barely raising his eyes to anyone, except to accept a cup of tea.Chris  was thrown a lifeline by the public after he was initially rejected for the finals, but has since, to the surprise of many, sailed through to the final of the show. Over-28s mentor Gary Barlow had opted not to take him through to the live finals because of his nerves.

But viewers took a shine to the 34-year-old customer services manager from Liverpool and voted him through as the wildcard contestant.The 34-year-old had said he wanted to compete in X Factor for years but was always too nervous to apply, but eventually went for it with the encouragement of his grandmother Pat. – Dailymail