Ten languages in one song 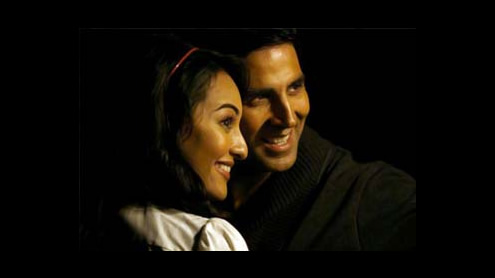 Actor Amitabh Bachchan proclaimed his love for his leading lady in three languages in the song Angreji mein kehte hai I love you in his 1982 hit, Khuddar.

Now, Joker’s director Shirish Kunder has gone a step ahead and translated the words ‘dance kar le’ in 10 different Indian languages for a song in his upcoming film. Dance kar le has been sung by Daler Mehndi and features lead actors Akshay Kumar and Sonakshi Sinha. “It reminds you of Bachchan’s song from the ’80s, though it is not inspired from it,” says a source. The lyrics of the song have been written by Shirish himself.

He confirms this news saying, “Yes, in the track, we have featured the word ‘dancing’ in English, Hindi, Tamil, Telugu, Kannada, Malayalam, Gujarati, Marathi, Bengali and Punjabi. We believe this will be a novelty factor for the film.” The song has been composed by Oscar-winning composer AR Rahman’s nephew, GV Prakash. The story of the sci-fi film revolves around a mysterious fictitious town called Paglapur, where an unidentified flying object (UFO) lands. -Pakistantoday

Pakistan can pay off debts within six months

Pakistan can pay off debts within six months