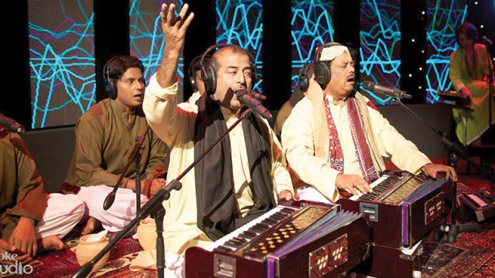 KARACHI: In its fourth episode this season, the “Coke Studio” house band treated listeners to one of the most musically challenging compositions of the season. From the brilliant combination of the Chakwal Group and Bohemia to a larger than life rendition of Amir Khusro by Fareed Ayaz and Abu Mohammad, what emerged from the fourth episode was pure and honest music.

A stellar combo The Chakwal Group managed to take it to the next level with their traditional song “Kandyaari” after the sensual “Ishq Aap Bhi Awalla”. “Kandyaari” is a love song written by Aziz Lohar, a contemporary singer from the Chakwalis who hails from a village named Shah Khushi in Chakwal. Credit must be given to Bohemia for lightening up the mature lyrical content of the poetry with his rap. Towards the end, the song turns into an interesting fusion of contrasting tragedies of love, one referring to spiritual inclinations and the other to materialism.

Pashto music with a twist “Tora Bahraam Khaana” is a romantic song in which a woman is talking to her lover – Bahraam Khan – who does not fit society’s definition of a good looking man because of his dark complexion. Just like “Larsha Pekhawar Ta”, this song also comprises of the traditional Tappas which have been neatly fused together into a musically-rich piece which has been  orchestrated well by “Coke Studio” musicians. Those who were disappointed with “Larsha Pekhwawar” should listen to this traditional and ethnic Pashto masterpiece. Hamayoon Khan proves his vocal prowess yet again and can be considered one of the few Pakistani musicians who have successfully fused traditional Pashto music with contemporary styles – not just for “Coke Studio” but in solo albums as well.

The duo that stole the limelight Fareed Ayaz and Abu Mohammad are gifted musicians. Their version of “Rung” is considered closest to the original rendition by Amir Khusro. Both theirs and Hadiqa Kayani’s versions of the Qawali are unique in their own aspect. Khusro was inspired to write this kalaam after he met his pir Nizamuddin Auliya. It is said that he returned home in a state of ecstasy and told his mother that the world now seemed to be filled with divine radiance as he had at last met the person he had been looking for all his life.

When “Rung” was initially released, it went on to become an important part of many different sufi orders such as Qadris and Chishtis. Ultimately, it became common practice to close any show or gathering with this song because of its impact on the audience.  “Coke Studio” officials say, “One reason why traditional music continues to survive today is because of its evolution in time. By featuring two different versions of Rung in one season, this point is highlighted and experimentation with traditional music is encouraged; provided the essence of the original is not sacrificed”.

With a spectacular end to its fourth episode, “Coke Studio” leaves the audience craving for more. All in all, this episode was one the audience will not forget. The Twitter buzz -Why does Atif Aslam have to wear different clothes for every song on “Coke Studio”? -“Coke Studio” rocked again. Indian music depends on its film industry only while Pakistan’s music is a big sea -Bohemia featuring Chakwal Group rocks “Coke Studio” -Didn’t like it that much. Uzair Jaswal, Qawali duo and Atif aren’t bad. But “Coke Studio” music is becoming the same day by day.

“Coke Studio” should discontinue the series and let people remember the first and the second season. Stop getting worse every year! -Atif Aslam rocked in the ‘Coke Studio’… He was looking so hot, cool and dashing.” -Why is “Coke Studio” turning out to be such a disappointment? Fareed Ayaz and Abu Muhammad are singing the same tracks Hadiqa Kiyani sang in the last one. -“Heard two songs from the new ‘Coke Studio’ episode. Both of them were pretty disappointing. -Tribune