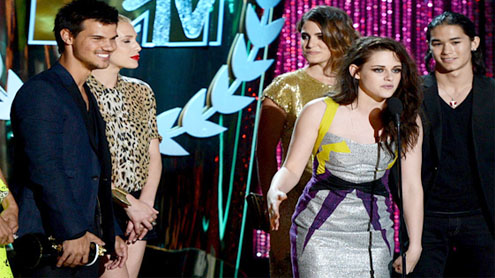 Female-led comedy “Bridesmaids” picked up two awards for best comedic performance by Melissa McCarthy and best gut-wrenching performance for its stomach-turning food poisoning scene, while the final installment of the “Harry Potter” franchise won for best cast and best hero.Host Russell Brand, known for raunchy humor, launched into jokes about his short-lived marriage to singer Katy Perry, thanking Kim Kardashian for “taking the pressure off me” due to her brief marriage to basketball player Kris Humphries and joking about keeping his “eyes peeled” for a new wife.His barbs also were directed at pop star Justin Bieber, Charlie Sheen, John Travolta, Kanye West and “Shame” actor Michael Fassbender for “profiting from sex addiction.”

“The Descendants” star Shailene Woodley picked up the breakthrough performance award. “Spiderman” actress Emma Stone was given the trailblazer trophy and Johnny Depp was honored with the generation award for a career spanning three decades.”It’s like the get-out-of-the-business award basically, when you’ve done too much … There’s obviously something wrong with me,” Depp joked in his acceptance speech.The “Pirates of the Caribbean” actor showed off his guitar skills, joining rockers The Black Keys for their hit singles “Gold On The Ceiling” and “Lonely Boy.”

In some of the night’s more irreverent categories, Jennifer Aniston picked up the best on-screen dirtbag award for her role as a foul-mouthed, blackmailing dentist in “Horrible Bosses.”The best kiss trophy was again given to “Twilight” leads Kristen Stewart and Robert Pattinson, who have won for their steamy on-screen clinches for the past three years.

Despite its billing an outrageous event, the show seemed more tame than in previous years with little foul language or onstage antics. Channing Tatum, Matthew McConaughey and Joe Manganiello did some spicing up with a near strip tease. The trio stars in an upcoming film, “Magic Mike,” about male strippers.Notable moments came from “Batman” star Christian Bale, who gave an emotional introduction to an exclusive trailer for the upcoming film, “The Dark Knight Rises,” after footage of the late Heath Ledger as the Joker character was shown from the second installment of the Christopher Nolan “Batman” franchise.