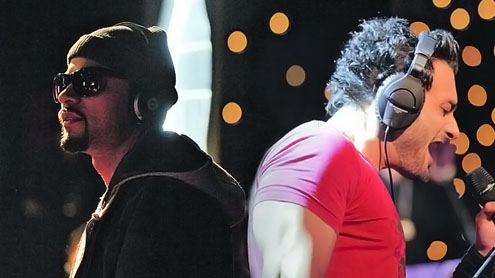 After the fizzling out of the mass appeal that bands like the Vital Signs and Junoon commanded, it seemed as if we would be forced to go through a period without a true ‘champion’ of the music scene.

Despite a number of newsworthy acts such as Noori, Strings, EP and others, there was dearth in the kinds of bands that really had everyone singing out Bulleya or even Dil Dil Pakistan. And while artistes like Ali Zafar and Atif Aslam were (and are) very successful, in reality they occupy the domain would have them be stars more than musicians (the former much more than the latter).

But in the past half decade, music has evolved in an unexpected way with Coke Studio (CS) inheriting the role of providing the most anticipated collection of music each season. Surprising because such a move by a private company, with what could have been an obnoxious way to brand something but isn’t, should have led to a lot of ‘sell-out’ music. Yet it hasn’t. In fact, the venture has become akin to a record label, where a smart producer recruits talented musicians to create a loosely defined genre of music, combining everything everyone has heard before, in a refreshingly new way. The name of the label might prominently feature Pakistan’s biggest beverage maker, but it hasn’t sunk into the minds of listeners as the show being the company’s asset as much as the name simply referring to a cool music show.

Of course, CS has its critics; a number of people claim that it hasn’t brought anything new in quite a while, or less harshly, that it sometimes manages to get stuck into a rut. A line not without merit; the crimson studio does tend to get repetitive at times. Often, it’s easy to pick out an attempt to recreate a similar sounding hit from a previous season, the effort usually producing mediocre fare.

But consider this: not since Peter Gabriel and Ustad Nusrat Fateh Ali Khan (NFAK) has anything yielded collaborations between artistes as opposite as Ali Azmat and Rahat Fateh Ali Khan, Meesha Shafi and Arif Lohar, Noori and Saeen Zahoor; the show has also reinforced the idea that some artistes who would have soon been forgotten (for instance, Sajjad Ali) are actually still some of the most fun (and talented) musicians around. Also, some of the biggest and arguably best hits of the past few years have been songs such Alif Allah Chambey di Booti, Jalpari, and Aik Alif, songs which were popular before CS but jumped to a whole other level after being performed on the show.

To what I think is an equally big credit, and possibly bigger is the fact that after NFAK made qawwali and Junoon made Sufi rock cool, but the end of both meant there was no more experimenting in the two genres. Rahat Fateh Ali Khan was still singing qawwali, but primarily for Bollywood, which is about as commercial as music can get. CS re-introduced the idea of experimenting with music, and while the results may not have been successful each time, the show encourages musicians to keep jamming and trying out new ideas—from making catchy numbers, to pieces that would fit better as scores to films. Vital experimentation, if music is to keep evolving.

The fifth edition of CS, which starts today, features the return of Atif Aslam, Bilal Khan and Meesha Shafi, Fareed Ayaz and Abu Muhammad, and invites as first-time performers Hadiqa Kiyani, Qayaas, Bohemia (of Kaali Denali fame) and Symt. The show will also continue in its quest to fuse everything drums, guitars and back-up singers (or what we call western music) with regionally inspired music by inviting Tahir Mithu, Sheedi and Mai Allah Widhai. This season also follows the departure of Gumby who chose to devote his energy to Uth Records, and the introduction of Farhad Humayun (from Overload) on the drummer’s pedestal and Mubashir Admani on keyboards.

Images on Sunday was invited backstage to witness Rohail Hyatt conduct the CS orchestra and listen in on the artistes rehearsing and singing to the final takes. Out of the songs that I heard, Atif Aslam’s collaboration with Qayaas on Mera Aye Charkha Nolakha, originally a kalam by Baba Bulleh Shah, seemed quite promising. It carries a catchy beat, sort of like the Dum Gutkoon refrain in season three, but with a more brazen tone—especially when Umair Jaswal from Qayaas kicks in. Another artiste to look forward to is Bilal Khan who is said to have three tracks on the show!

One of the artistes to watch out for this season will be Bohemia. The Pakistani-American rapper from San Diego California was humbled by being at CS, “I’m completely in awe of Rohailji, I can’t believe I’m even here. It is such an honour.” While I wasn’t around to watch him shoot his performance, the rapper is a first for the show and should be interesting to watch.

Of course, all opinions on the songs are reserved until after they are aired. But with everyone’s thoughts on the show ranging from “let’s see what they do this time” to “the only that is happening in the music industry” to “the best that the country’s music industry has to offer” (all original quotes by real people who unfortunately can’t be named here), the fifth edition of Coke Studio is again certainly something to tune in to. – Dawn