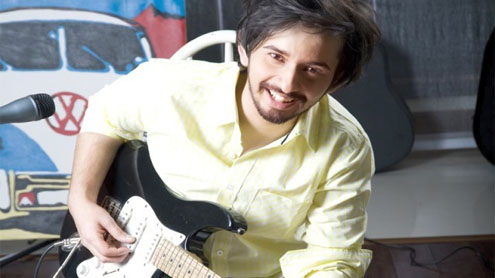 Musician Jimmy Khan, who made his debut with ‘Pehla Pyar’ in 2011 to popular acclaim, now, releases his second single and video for his original song, ‘Aisay Kaisay’, this April 2012.

Composed and written by Jimmy himself, the song speaks about how one forms perceptions about people and relationships and his lyrics unfold how these perceptions are often shattered. The video, directed by Taimoor Salahuddin of Aflatoon Studios is first set in the pre partition/colonial era and through Jimmy Khan and his bands’ performance of the song ‘Aisay Kaisay’, transforms from this era into contemporary times where only the subjects remain the same as the song aims to be much ahead of its time hence the transformation.

The set design for ‘Aisay Kaisay’ was done by Zohra Rahman and costumes by Mehrunnisa Khan.Speaking about the release of his second single, Jimmy Khan has said, “This is only my second single and like any artist, I am naturally excited and nervous, all at once.” A keen musician whose instrument of choice is an acoustic guitar, Jimmy Khan recorded his second single ‘Aisay Kaisay’ at True Brew Records by Jamal Rahman, who also produced the song, with final mastering at The Lodge – New York.

‘Aisay Kaisay’ features musicians Jamal Rahman on guitars, Sameer Ahmad (of Co-Ven and Mauj) on bass and Kami Paul on live drums. A Lahore based artist, Jimmy has been an amateur performer since the age of 14 and has been a definitive part of the Lahore underground music scene 2005. Over time, he has opened concerts for Pakistani music giants such as Atif Aslam, Noori and EP and was also one of the vocalists for the aptly titled ‘Cover Band’ which on numerous occasions has been known to feature music maestros like Gumby and Mekaal Hasan. He is also a resident performer at Lahore’s popular restaurant Gunsmoke. – PT