by ToP
in Music
3 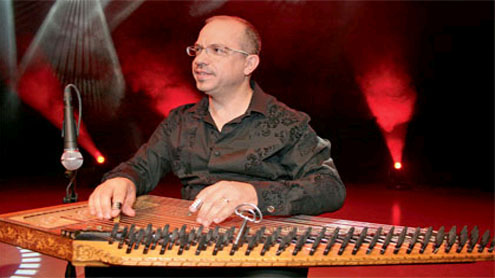 The Abu Dhabi Festival 2012 will pay tribute to the legacy of Abu Nasr Muhammad Al Farabi, the ninth century musician, philosopher and scientist, in ‘Bayt Al Farabi’, a series of three intimate concerts. Through his diverse work, Al Farabi provided a legacy of lasting enrichment to culture across the Arab world and Europe. The ‘Bayt Al Farabi’ initiative brings together a series of performers who each capture the spirit of Al Farabi in their work.

Taking place at the Emirates Palace from March 27 to 29, audiences will be able to enjoy the music of Anwar Abudragh and Maqamat from Iraq, Goksel Baktagir from Turkey, and Faisal Al Sari from the UAE. Anwar Abudragh and Maqamat will perform ‘Maqam Journey’, an exploration of traditional singing known as the ‘Maqam’, accompanied by the joza, santour, oud, raq and nay.

In a celebration of the heritage of classical Arab music and song, the evening will showcase the preservation of classical Arab music and song.Goksel Baktagir, the award-winning Turkish composer, academic, vocalist and instrumentalist known for his work to preserve the traditions of the qanun, will perform ‘Eastern Wind’. A musical innovator, Baktagir’s passion for music in all its forms and his unique blend of traditional and alternative music will be on show.

Representing the new generation of UAE artists, Faisal Al Sari will take to the stage with his performance ‘Synthesis’. The recipient of the 2009 ADMAF Creativity Award, Faisal’s music transcends East and West by combining the sounds of Emirati heritage with classical and jazz genres. – Khaleejnews