Adele sells most albums in a year since 2004 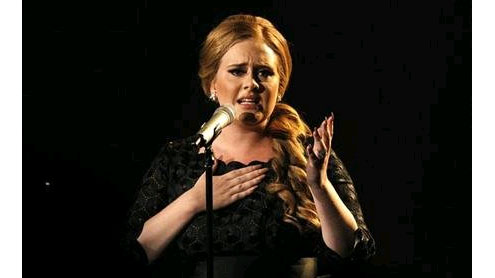 That Adele’s “21” will rank as the year’s top-selling album is no surprise – the English singer-songwriter’s hits “Rolling in the Deep” and “Someone Like You” dominated playlists in 2011. What is surprising is that “21,” released by independent British label XL Recordings, sold more than 5 million copies.

The last time an album topped the year-end chart with more than 5 million copies sold was in 2004, when Usher’s “Confessions” moved 7.9 million, according to Nielsen Soundscan, which supplied all sales data for this story.Indeed, music sales overall are expected to end 2011 up more than 3 percent from last year. Not coincidentally, the last time overall music sales rose by so much was in 2004 as well.The resurgence in sales is welcome news for the music industry. A meager 1 percent increase in digital sales last year created widespread panic that the format had already plateaued.

Nielsen analyst David Bakula attributed the rebound to a strong release slate, plus retailers getting more aggressive with pricing and promotions.For instance, Lady Gaga’s album “Born This Way” was priced at 99 cents – less than one-tenth the price of most albums – in a special deal, helping drive sales beyond her core fans, he said. The promotion on Amazon.com angered other retailers who were selling the album at full price, however.”In 2004, you had one massive album driving sales,” said Bakula, senior vice president of entertainment analytics for Nielsen. “This year is similar in that you have one really great story that everyone is talking about.”

Digital sales are expected to end 2011 close to 10 percent higher, prompting Bakula to proclaim the sales performance “a great resurgence.”Physical albums still outsell digital albums by a 2:1 margin. But total music sales, which would include digital singles, are now split 50-50 between physical and digital.To put Adele’s sales figures in context, the more than 3.5 million physical albums she sold this year would have been good enough to take the top spot in each of the last three years without even adding in digital sales. Album sales include LPs, compact discs and digital albums.

Figures for the year’s best-selling album declined every year from 2004 to 2008. They hit an all-time low in 2008 when Lil Wayne’s “Tha Carter III” took the top spot with sales of just 2.9 million, the first time an album claimed the best-seller title with sales of less than 3 million.Since 2008, however, sales of the top-selling album of the year have increased, though not by much.

Taylor Swift took the top spot in 2009, selling 3.2 million copies of “Fearless.” Eminem’s “Recovery” finished 2010 as the year’s best-seller with 3.4 million copies.”Adele’s performance this year shows the demand for great original music,” Bakula said. “Here’s an artist that had moderate success before, but nothing of this magnitude, and she’s doing it all on two singles.”

Amy Winehouse’s death from alcohol poisoning in July also factored into Adele’s sales performance. Bakula said the attention Winehouse’s death received stoked interest among fans to sample other soulful, jazz-infused female British singer-songwriters, like Adele and Duffy. As a result, in addition to buying “21,” consumers dipped into Adele’s back catalog, making her prior release, “19,” one of the year’s top 25 best-sellers.Still, Adele’s sales total is less than half of the more than 11 million copies that “No Strings Attached” from N’Sync sold in 2000. That year marked the last time the top spot featured an album that sold in excess of 10 million, underscoring the dramatic impact that legitimate digital distribution channels like Apple’s iTunes and illegal file-sharing sites such as Limewire have had on the music industry. – Yahoonews